“Brazil should not be isolated” on the international scene, said the Brazilian president-elect on Wednesday, while Jair Bolsonaro’s mandate was marked by a massive increase in deforestation. 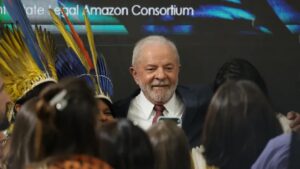 A COP at the heart of the planet’s lungs? Brazilian President-elect Lula announced Wednesday, November 16, in Sharm el-Sheikh (Egypt) his wish to organize the UN climate conference in 2025 (COP30) in the Amazon. “We are going to talk to the UN Secretary General” to make the request, said Lula, who will take office on January 1, 2023. The 77-year-old politician is making his first trip abroad since his election at the end of October at COP27, which runs until November 18 in Egypt.

“Brazil should not be isolated” on the international scene, he stressed, as the country had withdrawn into itself under the mandate of Jair Bolsonaro. Brazil had been chosen to host the COP in 2019, but reversed this decision after the election of the far-right president at the end of 2018. The latter then promoted policies favoring agribusiness and the mining sector, leading to a massive increase in deforestation.

Emmanuel Macron welcomes “the return of Brazil to an Amazon strategy”

Emmanuel Macron on Thursday supported the Brazilian president’s proposal. “I fervently wish we could have a COP in the Amazon,” he said while traveling to Bangkok for the Asia-Pacific Cooperation Forum summit. “I support Brazil’s return to an Amazon strategy. We need it,” insisted the head of state.

“France is an Indo-Pacific power and an Amazonian power. The largest external border of France and Europe is the border of our Guyana with Brazil”, he recalled.

Today News Post - November 19, 2022 0
Florida is frequently hit by successive hurricanes. Do the thousands of inhabitants still want to rebuild and live again with this risk? Trip Valigorsky's house,...