Franck Mathevon, director of international information for Radio France, answers questions from listeners on coverage of the war in Ukraine with the mediator of the antennas of Radio France, Emmanuelle Daviet. 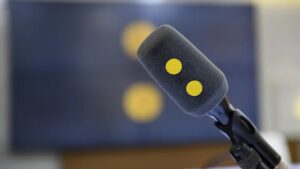 Continued coverage of the war in Ukraine. Subject of many letters from listeners for the mediator of the antennas of Radio France. (CHRISTOPHE ABRAMOWITZ)

The listeners wrote to the mediator of the antennas of Radio France, Emmanuelle Daviet. They ask how Radio France intends to cover the follow-up to the war in Ukraine in the coming weeks. Franck Mathevon, director of international information for Radio France is the guest of this meeting.

Emmanuelle Daviet: How do you continue to cover the war in Ukraine?

Franck Mathevon: So the war in Ukraine remains our priority for international editorial staff. And to better cover the conflict, we even decided to set up a temporary post in kyiv. This has been the case since November 1. We are one of the few media that have chosen to have a post in the Ukrainian capital. It is Agathe Mahuet, a reporter for Radio France, who currently holds this position. We are actually going to organize two-month rotations with other reporters from the various Radio France channels and the international editorial staff.

We have made all the arrangements. We rent an apartment with an office. We have made sure that this accommodation is relatively central, that it is not located on a high floor. For security reasons, and we know that there can be power cuts for example, if there was an elevator, it would not be a good idea. We also made sure that the building had a shelter. This office even has an electric generator. And then obviously, that’s important, all the necessary safety equipment.

Agathe works with a fixer-translator, he is a Ukrainian who has a good network and who knows our work as a radio journalist very well. And then, when it moves near the front, on terrain that can be considered dangerous, even if kyiv, as we know, is dangerous, the capital has been targeted by missile fire in recent weeks. In these cases, a technician leaves Paris to join our reporter. This is the case for example at the moment, Gilles Gallinaro went to Ukraine alongside Agathe Mahuet, to work in the region of Kherson, this city which was recently liberated by the Ukrainians.

We have another freelance journalist permanently in Ukraine, a freelancer, who is not part of the staff of Radio France. Her name is Maurine Mercier. She mainly works for Radio France and for our colleagues at Radio Television Suisse. And then obviously, depending on the news, we may have to send reporters to Ukraine or to other sectors. This is what we did this week in Poland. Poland, which was targeted by a missile, which raised fears of an escalation of the conflict. I would add that we are part of the media which are fortunate to have a permanent correspondent in Moscow, Sylvain Tronchet. And it’s very important for us too, to have full coverage of the war.

You indicate that there will be a rotation of journalists for this office in kyiv. Are there many applicants?

Yes, we may be surprised, but at Radio France, there were many candidates to go to kyiv, to spend two months in the field, to cover this conflict as closely as possible. It is simply a question of accomplishing his mission as a journalist at the moment, and I think that there are a lot of candidates at Radio France for that.

There is this position in kyiv, you are present on the ground, behind the scenes in Paris. What are the means deployed to relate this conflict?

So yes, in Paris too, we are mobilized on this news. First, many of our reporters went on the ground in Ukraine. I went there myself. We follow all the diplomatic or economic developments linked to this war, for example the energy war, and the rise in gas prices which is affecting all of Europe. We follow it in Paris, and with our correspondents in Brussels, Berlin, Rome. It is also precious for us to have a correspondent now in Istanbul, Marie-Pierre Verot. This is a new position that we implemented in September. This allows us to follow, for example, as closely as possible, the agreement on cereals in the Black Sea, which is supervised by Turkey.

And then in Paris, we have two precious collaborators at the moment, a Ukrainian translator, Anna Ognyanyk, and a Russian journalist in exile, Denis Kataev, who also works for the independent media Dojd. Both help us to cover the war, to collect testimonies, to do translations, quite simply. And they are essential for coverage of the war in Ukraine too.

We end with the podcast dedicated to Ukraine, the 100th episode was released this week. A work of analysis, collection of testimonies, very appreciated by the listeners, here is a message:

“I would like to thank the journalists taking part in the ‘War in Ukraine’ podcast. They are doing fundamental work. This podcast has been with me since the beginning of the war. I like to follow the correspondents, hear their distress, the difficulty to report terrible scenes.

All the messages received on this podcast are very complimentary, what does this feedback from listeners inspire in you?

It is very rewarding. We are very proud to be able to offer this podcast to our listeners. This is a podcast that is today presented by Isabelle Labeyrie, whom Radio France listeners know well. Every morning, she writes the Le monde est à nous column on the airwaves, and her job is to discuss with our reporters in the field, our correspondents, our experts in the international editorial staff to offer twice a week the Monday and Thursday now, a sort of digest of our coverage of the war.

The objective is to be on the ground and then to archive, I would say, this historic event. It is the only podcast, it is important to report it to Radio France, which is carried simultaneously by all the channels. It is led by our team, the international editorial staff. And then we will continue this coverage during the war in Ukraine. I could even specify that we want this podcast to end fairly quickly. That would undoubtedly mean the end of the conflict.

Today News Post - October 29, 2022 0
The severity of the Chinese authorities in terms of policy against Covid-19 seems to be increasingly criticized in the country. The challenge is now...