The nine-time WRC world champion signed a fourth consecutive victory on Thursday in the Empty Quarter. 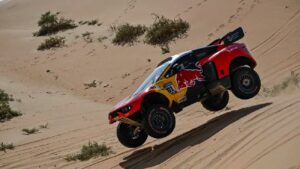 French driver Sebastien Loeb (BRX) during the 10th stage of the Dakar, between Haradh and Shaybah, on January 11, 2023. (GIGI SOLDANO / AFP)

Sharing, he does not know. This is also what allowed him to enter the legend of motorsports, remaining world rally champion for nine years (2004 to 2012). Sebastien Loeb (BRX), unable to thwart the plans of Nasser Al-Attiyah who is heading towards a fifth Dakar title, is therefore on a mission to line up the victories and get closer to second place in the general classification. Still as offensive, and more and more at ease in the middle of the Saudi dunes, the Alsatian signed a fourth success in a row, Thursday January 12, on the occasion of the 11th stage, his fifth on this Dakar.

At the end of this marathon day (427 km and no assistance bivouac at the finish), marked by a 274 km special between Shaybah and the Empty Quarter, he was ahead of his compatriot Guerlain Chicherit (GCK Motorsport, +2′ ’16) and Swede Mattias Ekstrom (Audi, +2’26”). The Qatari defending champion, the overall leader (more than 1h20 ahead of the second), for his part, quietly finished with the fifth fastest time of the day (+6’42”).

Loeb in the rear view mirror of Moraes

As a result, the Frenchman’s delay in the overall standings, especially behind the runner-up Lucas Moraes, is melting away as quickly as his victories, which pass special after special. From now on, Sebastien Loeb has a little less than ten minutes of disbursements compared to the Brazilian who sees, more than ever, in his rear view mirror, the BRX of the French driver. At this crazy pace (he took 33’46” from him in his last four victories), he could even overtake him by Saturday evening at Al-Hofuf, the day before the final arrival in Dammam.