Fuel in Italy is among the most expensive in Europe, but the country’s finances do not allow motorists to be helped. This creates discontent in the population, and a crisis within the government. 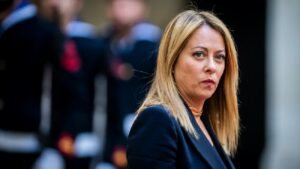 The President of the Italian Council in Rome on January 10, 2023 (ALESSANDRO SERRANO’ (MAXPPP)

Italy can’t afford to lower fuel taxes, and it’s not going well at all. Giorgia Meloni even addressed the Italians directly via social networks to explain and denounce a bad media campaign.

The problem is that this government has made a choice in the finance law – as in France for that matter: that of not renewing the reduction of 18 centimes per liter of fuel which ended on December 31. But he didn’t replace it with anything else. From the first days of January, prices therefore increased, even exploded, and according to some it was the fault of the speculation of distributors and oil companies. The government lets the rumour, even accompanies it, just to drown the fish, because in the end some stations have indeed abused. But prices have actually increased by roughly 18 cents, the equivalent of the state rebate so far.

Giorgia Meloni has decided not to go back: no specific financial aid for motorists therefore. But it requires service stations to display fuel prices and, right next to it, the national average price which will be communicated daily by the government to gas station attendants. The idea is that the consumer is informed and moves on if the fuel is too expensive. But of course, that doesn’t end the grumbling; and the problem is that within the government itself, the League of Matteo Salvini like Forza Italia do not agree with Giorgia Meloni. For them, the price of gasoline is a flammable issue, one month before very important regional elections for the League in particular.

Crisis within the government but also first crisis for Giorgia Meloni with public opinion. The head of government, converted to pragmatism, is doing it wrong. Social networks have also brought out a video from 2019 where she staged herself in a gas station, horrified by the scandal of state fuel taxes which, of course, she would delete.

The promise was not kept after coming to power because reality must be taken into account: money does not fall from the sky… Race result: Giorgia Meloni will also have to deal with distributors. The latter have planned to meet on January 17, before negotiating with the government.

Today News Post - December 17, 2022 0
How to know everything about intelligence in Europe and in the world? A book lists all the services concerned, with detailed maps.A book to...