During her general policy speech, the new head of the Italian government tried to reassure Brussels and Rome’s partners. 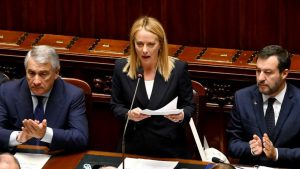 Italy’s new Council President Giorgia Meloni speaks on October 25, 2022, during her maiden speech to Parliament. She is alongside Foreign Minister Antonio Tajani and Infrastructure Minister Matteo Salvini, before a vote of confidence at the Montecitirio palace in Rome. (ANDREAS SOLARO / AFP)

Giorgia Meloni seeks to shed the “post-fascist” label. The new president of the Italian Council denied Tuesday, October 25, any “proximity” with fascism, during her speech on generalpolicy before the deputies. “I have never had sympathy or closeness to anti-democratic regimes. For any regime, including fascism,” said the one who was an admirer of Mussolini in her youth. Giorgia Meloni, who with her far-right Fratelli d’Italia party won a historic victory in the Italian legislative elections, was officially appointed head of government on Friday. The 45-year-old Roman, the first woman to hold this position, succeeded in “de-demonizing” her party to gain power.

The head of government also anchored Italy at the heart of the European Union and NATO. Giorgia Meloni promised that Italy would remain “a reliable NATO partner in support of Ukraine, which opposes Russia’s aggression”, assuring that the country would “respect European rules”. She explained that the Italian approach was not to “hinder and sabotage European integration” but to make the Community machine work better.

These statements are intended to reassure Brussels and Rome’s partners, as Giorgia Meloni has pro-Russian partners in her coalition, including League leader Matteo Salvini and Forza Italia leader Silvio Berlusconi, a personal friend of Vladimir Putin. “Caving in to Putin’s energy blackmail wouldn’t solve the problem, it would make it worse, paving the way for further claims and blackmail and future energy (price) increases even bigger than we’ve seen. in recent months,” said the President of the Council.