Sophie Cais, however, believes that “human means” have been put in place to be able to examine the situation of all migrants. She denounces a “serious lack of translators” in certain languages. 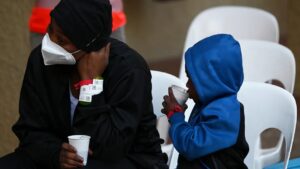 A woman and a child, passengers of the Ocean Viking, upon their arrival at the “Giens Cap Levant” holiday center in Hyeres, November 11, 2022. (AFP)

Sophie Cais, president of the order of lawyers at the bar of Toulon, estimates Friday afternoon November 18 on franceinfo that to ask the judges of freedoms and detention to “rule in 24 hours on 180 files” of migrant survivors of the Ocean Viking “is radically impossible”.

The Aix en Provence Court of Appeal authorized Friday, November 18, 108 of the 234 migrants rescued last Friday to leave the waiting area of ​​the Giens peninsula in which they were. This decision is motivated by “a number of procedural defects”, specifies Sophie Cais, in particular because the 24-hour period within which the justice must decide to extend the detention in the waiting area has not been respected.

The Toulon court has however “put the means”, according to it, with five judges of freedoms and detention mobilized over two half-days of hearing, but “it is not absorbable as a volume of files”. As a result, around 100 migrants were allowed to leave the holiday center which acted as a waiting area.

This “very specific procedure for keeping in the waiting area is absolutely unrelated to the asylum application procedure”, recalls the president of the order of lawyers at the Toulon bar.

Sophie Cais also deplores the conditions in which migrants were heard by the courts to explain their situation, due to a “serious lack of translators” for certain languages.

“Migrants were taken out of the waiting area and arrived by bus at the courthouse without knowing why they were there,” she explains.