In diplomatic conflict for several days with Italy about the reception of migrants present on the boat, Gerald Darmanin announced, Thursday, November 10, at the exit of the Council of Ministers that the humanitarian ship would land in Toulon the next day. 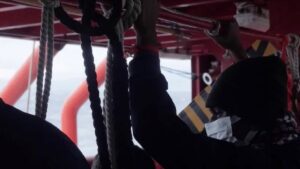 It’s the end of a grueling three-week journey in the Mediterranean on Thursday 10 November. More than 230 migrants, including 57 children survived on board the Ocean Viking, a rescue boat, in very difficult sanitary conditions. The Minister of the Interior decided on Thursday after a long standoff with Italy. “Faced with this situation, the French authorities have taken the exceptional decision to remedy the unacceptable behavior of the Italian government and to call the ship to join the military port of Toulon (Var)”, says Gérald Darmanin.

Migrants who had fled Africa will finally touch dry land on Friday, November 11. “It’s a great relief and also a lot of bitterness because it’s a sequence that has been extremely painful for three weeks on board the boat”, underlines Sophie Beau, general manager of SOS Mediterranee. An unprecedented expectation according to her. Upon their arrival in Toulon (Var), the survivors will be taken care of by agents of the French office for the protection of refugees and stateless persons. If the right of asylum is granted to them, France will welcome a third of the beneficiaries, the others will be supported by European countries.

Today News Post - October 31, 2022 0
More than 500 filter dams aimed at controlling coaches had been recorded by midday across the country, according to a Brazilian media. The left...