More than 500 filter dams aimed at controlling coaches had been recorded by midday across the country, according to a Brazilian media. The left cried foul. 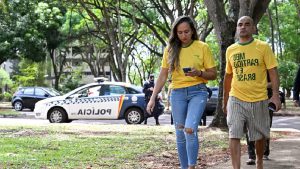 The controversy swells in Brazil. The president of the country’s Superior Electoral Tribunal (TSE) announced on Sunday (October 30) the lifting of filtering barriers by the federal road police (PRF) which had “delayed the arrival of voters” at polling stations for the presidential election, while that the left has cried foul.

“The lifting of these operations was decided to avoid voter delays” in the offices, said Alexandre Moraes, president of the TSE, at a press conference, just over an hour from the closing of the polls. (9 p.m. in Paris).

“Inadmissible” according to Lula

Leaders of the Workers’ Party (PT, left) relayed on social networks many videos of buses transporting voters at a standstill, especially in rural areas of the Northeast, electoral stronghold of ex-President Luiz Inacio Lula da Silva “It’s unacceptable what is happening right now in the Northeast,” lamented Lula, favorite in the polls, on his Telegram account.

The president of the Superior Electoral Tribunal (TSE) clarified that, despite the delays, “no coach turned back and all the voters were able to vote”.

On Saturday evening, the TSE had decided to “prohibit any operation of the PRF which would harm the transport of voters” on Sunday. The president of the PT, Gleisi Hoffmann, announced on Twitter that she had called for the arrest of the director of the PRF, Silvinei Vasques, for “non-compliance” with this decision of the TSE. The director of the federal road police is a very controversial personality: on Sunday morning, he published in an Instagram story an image in which he called for a vote for far-right president Jair Bolsonaro.

According to the daily Folha de S. Paulo, more than 500 filter barriers aimed at controlling buses were registered at midday across the country, 70% more than in the first round, on October 2.