While the congress of the Chinese Communist Party has just ended, associations are asking for the closure of the Confucius institutes in France, the Chinese equivalent of the French alliances, important relays of influence from China. 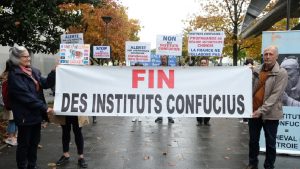 This is a great first in France: associations, supported by elected officials, openly demand the closure and prohibition of Confucius institutes in the country. These structures participate in the Chinese “soft power”, a capacity of influence abroad which makes it possible to discover a culture or a language. There are about twenty of them on French territory and for several years, Uyghur, Tibetan, Mongolian and Hong Kong groups have been calling on France to review its position on the presence of these associations on its territory.

A distrust which is not new in France, but which had never been displayed so openly, while the 20th congress of the Chinese Communist Party has just been held in Beijing. Other countries, such as the United States, England or Belgium, have closed these institutes, denouncing the propaganda, espionage and surveillance of opponents of the Chinese regime.

In France, awareness is a little slower, some elected officials lament, despite repeated alerts. “I don’t hesitate, when I see the President of the Republic, to tell him what I think of the leniency that we have with regard to a State which is totalitarian and which has a storefront, and not only through the Confucius institutes”, annoys André Gattolin, senator of the presidential majority, and present at a gathering of opponents of these institutes in Paris, on October 21, 2022.

“Today, there are several thousand associations which are financed or infiltrated by Chinese representatives.”

This dense association, financial and academic network has an impact on the freedom of French researchers. Some may, for example, be denied a visa, if the nature of their work displeases Beijing. This is the experience of the sinologist Marie Holzman: “It is difficult to study subjects that displease the Chinese government in a university where we have a Confucius Institute, she says. Myself, I I defended political prisoners, the great Chinese dissidents of the 1970s. From 1995, the Chinese government spotted me and deprived me of a visa to go to China.” 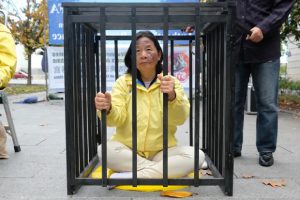 An opponent of the Confucius Institutes, during a demonstration in Paris, October 21, 2022. (NATHANEL CHARBONNIER / RADIO FRANCE)

“That shouldn’t exist,” she insists, citing several examples: “We had the €40,000 scandal at the Confucius Institute in Angers in 2021, the same thing in Pau with €40,000 for 40 students from a Confucius Institute. I found that absurd.” Brigitte Guiraud asks the Minister of Higher Education to ban Confucius Institutes in France, in the name of our country’s democratic values.