The intruder of the news gives each evening a spotlight on a personality who could have passed under the radar of the news. 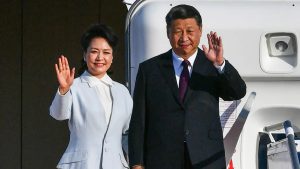 When we say that there are no longer any women in the entourage of re-elected Chinese President Xi Jinping, we are talking about the Politburo and its now 25 out of 25 men! The only woman to sit there has been retired and replaced by a man. Sun Chunlan, 72, had been the “Madame Covid-19” for two years. There remain at most 11 women on the Central Committee out of 205 members. And yet in the party itself, one in three members is a member.

However, a woman counts alongside the all-powerful Chinese leader: Peng Liyuan. Unlike Mao or Zhou Enlai, Xi did not go so far as to install this wife in the politburo, but she is very useful to him. It must be said that Peng Liyuan’s profile is a bit special. China’s first lady is a variety singer. A soprano. Huge star, practically since she was 18, when she joined the People’s Liberation Army. We are then in 1980.

The absolute star of the New Year’s TV gala

She is therefore a singer and a soldier. Today Brigadier General. Within the army, she was noticed very quickly, she was sent to boost the morale of the troops. She progresses in rank and every year she is the absolute star of the New Year’s TV gala. It is the program most followed by hundreds of millions of Chinese. In green or white uniform. On the internet, the Chinese can see her singing on aircraft carriers or tanks.

There are even pictures of her singing for soldiers in Tiananmen Square right after the crackdown in June 1989. They had been married for just three years. In any case, it is a star that Xi Jin Ping married in 1987! The story says that the day they are introduced, he barely recognizes her and she finds him downright boorish. We are in 1986. He is nine years older than her. He is mayor of the port of Xiamen, married to the daughter of the Chinese ambassador to London. He divorced and in a few months, put the ring on his singer’s finger (so it’s 35 years this year) At the time, people didn’t say Madame Jing Ping But Monsieur Peng!

She finally put her career on hold in 2007, after 20 years of marriage, when he approached the top of the party. She will only sing except exceptionally, during the earthquake in Sichuan for example in 2008. She will really help Xi to make his mark among the military. Until he came to power in 2012.

In any case, she is a much more visible first lady than the previous ones… Apart from Mao’s last wife, all have remained in the shadows. Xi and Peng’s daughter is also studying in the United States under a pseudonym. But Peng herself, anyway, is too famous. She even studied: a master’s degree in traditional ethnic music. She is a member of the 11th Chinese People’s Political Consultative Conference which has no real power but still. She is even an ambassador for the World Health Organization (WHO) for tuberculosis and AIDS.

And then she is a real communication pro. The day Xi Jining is elected president, the very chic brunette takes his arm as he gets off the plane. The gesture will be perceived as daring and madly tender! In the end, Peng Liyuan softened his image a lot. She overplays the glamor in interviews, explaining that when he comes home at night, he’s not the president, and she’s not a singing star. They’re just husband and wife. In 2012, a poll elected her the second favorite personality of the Chinese, ahead of Jackie Chan. The Guardian even compared her to Carla Bruni, “plus popularity”.