This vote opens the way to a second term for the president at the head of the country, in the event of victory of the ANC in the general elections of 2024. 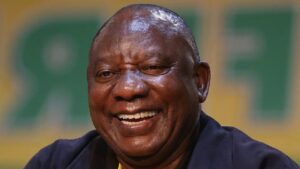 The African National Congress (ANC) in power in South Africa renewed its confidence in Cyril Ramaphosa to lead the movement and therefore lead the country. Aged 70, the current South African president is now assured of a second term at the head of the country if he wins the general elections of 2024.

The head of state, favorite despite a scandal and a foiled dismissal procedure a few days before this decisive vote, won 2,476 votes against 1,897 for his only rival and former Minister of Health, Zweli Mkhize. In total, they were some 4,400 ANC delegates, gathered in congress in Johannesburg since Friday.

They voted late into the night from Sunday to Monday. Uncertainty hovered until the last minute, as negotiations within the deeply divided party sparked rumors of a possible defeat for the current president, hampered for months by a dark case of burglary. The president is accused of having kept wads of dirty money at his home, preferring to cover up the affair when burglars stole the large sum of dollars in 2020 from his rural property in Phala Phala (northeast).

In difficulty, Cyril Ramaphosa was threatened with dismissal proceedings. The ANC thwarted the risk of an early departure by calling on its deputies, the majority in the Assembly, to close ranks around its president last week.