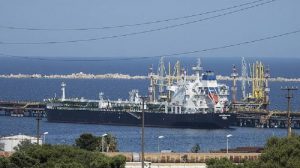 The ambassadors of the countries of the European Union (EU) agreed on the new eighth package of sanctions against Russia, which includes a price ceiling for Russian oil.

European Commission head Ursula von der Leyen confirmed on Wednesday that the countries have reached an agreement on the 8th package of sanctions.

“I welcome today’s agreement between the member states on the 8th package of sanctions. We walked fast and determined. We will never accept fictitious referendums organized by V. Putin, nor any annexation of Ukraine. We are determined to continue to make the Kremlin pay (for this),” tweeted the head of the EC, which proposed this package of sanctions last week in response to Russia’s announced annexation of four Ukrainian regions.

“We have approved a new package of sanctions. It includes the limitation of the price of Russian oil supplied to third countries and mechanisms aimed at avoiding the circumvention of sanctions,” Andrzej Sados, Poland’s ambassador to the EU, told reporters.

The draft agreement relied on the price ceiling mechanism for Russian oil already proposed by the G7 countries, although exact prices have not yet been agreed upon. US representatives have claimed that the exact prices could become clear in the coming weeks.

Malta, Cyprus and Greece, whose tankers carry the largest share of Russian oil, have previously worried that the price caps would negatively affect their volumes.

The Guardian, citing sources, reports that certain “guarantees” have been given to these countries.
Compromises are unavoidable

The 8th package of sanctions foresees new sanctions for officials who contributed to the annexation of Ukrainian territories. In previous sanctions packages, such restrictions have already been applied to more than 1,200 individuals and more than 100 companies and institutions. A few dozen more individuals will be included in the latest package.

It also extended the ban on imports of goods, including steel products, and banned the provision of IT, engineering and legal services to Russian entities, according to the release.

It would also limit Russia’s ability to acquire aviation goods, electronic components and certain chemicals in order to deprive the Russian military of access to critical technologies.

Some countries were concerned that the latest draft sanctions appeared to weaken several of the proposed measures, including adding a Russian diamond mining company to the sanctions list.

“The process was complicated, we had to agree on some exceptions, including those infamous red diamonds,” Sados said.

The new sanctions are expected to take effect on Thursday.

The head of Lithuania, Gitanas Nausėda, views the new sanctions as a “step forward”. According to the president, it will be possible to assess its extent in the future.

“He indicates that a step forward will be taken, and we will see how big it is,” G. Nausėda told reporters in Vilnius on Wednesday.

The Minister of Foreign Affairs of Lithuania, Gabrielius Landsbergis, has previously stated that the agreement reached by the EU countries on the eighth package of sanctions against Russia is weak, but better than none.

Today News Post - November 6, 2022 0
This is a record that could have a major influence on the country's political landscape. US President Joe Biden and Democratic and openly lesbian candidate...