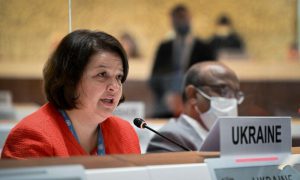 Ukraine announced on Friday that it had changed its mind following a landmark vote the day before, when the United Nations Human Rights Council in Geneva voted against holding a debate on alleged abuses in China’s Xinjiang region.

The vote comes after former UN rights chief Michelle Bachelet released her long-delayed report on Xinjiang in late August, which details alleged crimes against humanity against Uighurs and other Muslim minorities in the western Chinese region.

But intense pressure from Beijing appears to have had an effect on voters, with the 47-member council voting 19 to 17 against the debate, with 11 countries abstaining.

Most were not surprised by the results of the vote, as Beijing had conducted an intense lobbying campaign before the vote.

However, the decision to abstain from war-torn Ukraine, which is fighting Russian aggression and is heavily dependent on Western support, was unexpected.

Apparently, Ukraine itself has reconsidered this decision.

In an unusual move, Ukraine’s ambassador, Yevhenia Filipenko, asked on Friday that “the records reflect our position that we support the adoption of the said decision.”

Argentina’s Federico Villegas, president of the Human Rights Council, said that “we will pay attention to your statement” but stressed that “it will remain as it was yesterday in terms of voting practices and rules.”

Even if the UN were to take Ukraine’s latest statement into account, the outcome of China’s resolution would not change.