Norwegian police confirm that a foreign national was arrested by a border patrol on Friday night. After expressing a wish to apply for asylum, he was transferred to Oslo. 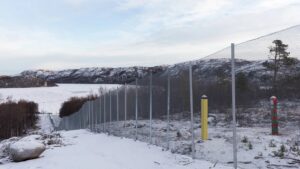 Illustrative image of the border between Norway and Russia, in November 2017. (AFP)

This is the story of an escape on foot in the snow, on the border between Russia and Norway. A man says he managed to cross the barbed wire fence separating the two countries on Thursday, January 12. This Russian citizen says his name is Andrei Medvedev, in a video broadcast Sunday on the Gulagu.net site, which specializes in Russian prison conditions. The young man explains that he led a unit of the paramilitary group Wagner, before leaving the mercenaries at the end of his four-month contract, signed in July.

For several minutes, this man gives an incredible account of his mad escape, carried out at night, near the Russian town of Nikel. He claims to have been chased by Russian security forces, who traced his fingerprints: “I heard two shots, the bullets whistled. I broke my phone and threw it in the forest.” The fugitive then said he walked across the ice-covered Pasvik River while a dog was loose after him. “The layer [of ice] was quite thin, and it even starred” during the crossing, he continues.

Arrived on the other bank, he then went to the house of a private individual to ask for help, before being arrested by the border guards and the Norwegian police. He was then transferred to a detention center elsewhere in the country – a usual procedure for asylum seekers. 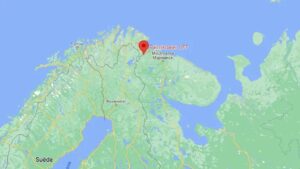 This so-called Andrei Medvedev, 25, who would have led a squad of Wagner, of about fifteen men, claims to have information on a dozen summary executions of mercenaries by their own group, because they refused to participate in the fighting. Contacted by the independent Russian media The Insider, he explains that he was a direct witness to some of them. He also adds that he has a video showing the killing of two refractory fighters in Alchevsk, in the Ukrainian region of Luhansk. What is unverifiable in the state.

The desire to collaborate with justice

The activist claims to have been in contact with the fugitive since early December, after being contacted by a friend of the mercenary. Andrei Medvedev would have signified his refusal to renew his four-month contract, which expired on November 6, angering the paramilitary command. “There is a rule among mercenaries: you don’t leave Wagner”, unless you are injured or killed. “So he feared for his life.”

According to this testimony, the ex-mercenary then managed to return to Russia. Without his documents, however, confiscated on his arrival at the front by the private group. Vladimir Ossetchkine also claims to have audio messages from the fighter, sent from the Donbass to his friend. He evokes in the former mercenary psychological after-effects linked to his experience at the front, consequences “of the stress of death”. Andrei Medvedev would have first thought of joining Georgia and Finland, without putting words into action.

This man, if he is telling the truth, had good reason to flee Russia. Within the Wagner group, refusal to fight, desertion and any other mood swings are severely punished. In mid-November, Telegram accounts close to Wagner thus broadcast images showing the summary execution of a man, killed with hammer blows to the skull. This mercenary, called Evgueni Noujine, was accused of having surrendered to the Ukrainian forces, before being taken back by the Russians.

Andrei Medvedev, precisely, affirms that the executed fighter was part of his unit, without specifying however if he was still in post at the time of this execution.

His identity not yet confirmed by Oslo

Moreover, was able to consult a photocopy of the identity card of a certain Andrei Medvedev, born in the Tomsk region, whose features, in the photograph, indeed resemble those of the man present in the video of gulagu.net. Without being able to establish with certainty the correspondence. Snapshots from 2015 allegedly show him in the Donbass, in the regular army.

At this stage, no official Norwegian source confirms his identity yet. The Finnmark district police, in a press release (in Norwegian), simply states that a man went to the home of a private individual, where he allegedly asked for help. This foreign national was then arrested by a patrol, before requesting asylum. “We were also warned by Russian border guards of traces suggesting an illegal border crossing,” said local police.

Contacted by the media NRK (in Norwegian), the first lawyer for this man, Jens Bernard Herstad, gave no details on the circumstances of his arrival in Norway. Nor did he confirm whether his client belonged to the Wagner group. His new lawyer, Brynjulf Risnes, explains to franceinfo that his client, Andrei Medvedev, is today “extremely tired”. He adds that the checks are still in progress, but that other documents seem to prove his identity, even if he no longer has a passport.

Wagner’s leader, Evgueni Prigojine, has already reacted via his press office. He claims that Andrei Medvedev fought well within his group, within an alleged Norwegian division called Nidhogg, because he would also have Norwegian nationality – rather surprisingly. Medvedev is described as “dangerous” and Wagner accuses him in return of having tried to mistreat prisoners. Charges brushed aside by Brynjulf Risnes: “I have never heard of a Norwegian division and my client does not have this nationality.”

The intelligence services, quoted by the Norwegian media NRK, will have to decide in particular on possible criminal proceedings in Norway, if this man really participated in the conflict within the group of mercenaries. Asked about possible criminal prosecution, because of his client’s role within Wagner, the lawyer replied that “security issues are very important” and understood that his client was subject to extensive hearings. At this stage, there is no suspicion of a possible complicity in a war crime, according to him.

The Norwegian Border Commissioner, Jens-Arne Hoilund, finally spoke with his Russian counterpart after the incident, says NRK. This is the classic procedure in such cases, under a border agreement signed in 1949 between the two countries.