On Saturday October 29, Russia announced to suspend the agreement which allowed the export of Ukrainian cereals. A decision that could have serious food consequences on several African countries. 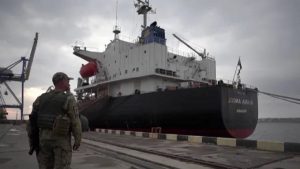 Ships full of grain, ready for export, are stuck at the quayside in Chornomorsk, Ukraine. According to President Volodymyr Zelensky, there would be 176 of them unable to cast off, with more than two million tonnes of grain on board. Since Saturday October 29, Russia has decided to suspend the agreement which allowed the export of Ukrainian cereals, following an attack suffered by its fleet in the Black Sea.

Somalia at risk of famine

A pretext, according to some observers, to put pressure on the international community. If the blockade were to continue, the consequences for the food security of the poorest countries most dependent on Ukrainian wheat could be catastrophic. Somalia, which depends 100% on Ukrainian wheat, is already facing a food crisis described as historic. The country is at risk of famine. The situation could also become critical in the Democratic Republic of Congo, Rwanda or Sudan.