EU member countries, as well as the United Kingdom, adopted sanctions on Thursday against Iran, accused of supplying drones to Russia. 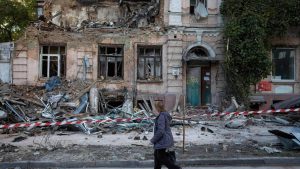 A woman walks in front of a building destroyed by a drone strike, in kyiv (Ukraine), October 17, 2022. (SOPA IMAGES / OLEKSII CHUMACHENKO / SIPA)

EU member countries adopted sanctions on Thursday (October 20th) against Iran, accused of supplying drones to Russia, used in the conflict.At the same time, Ukraine has limited the electricity consumption of its population and its businesses, particularly in kyiv, after several Russian strikes in recent days which have severely damaged its energy infrastructure. Franceinfo takes stock of the day’s news on the frontline of the war in Ukraine.

Iranian military ‘on the ground in Crimea’ to help Russia, White House says

Iranian soldiers are “on the ground in Crimea” to help Russian forces carry out drone attacks in Ukraine, the White House said Thursday.

“We believe that Iranian military personnel have been on the ground in Crimea and have assisted Russia in these operations,” said US presidential National Security Council spokesman John Kirby. “I don’t have the number of Iranians who are in Crimea,” he added.

London announced on Thursday that it would impose new sanctions against Iran targeting three generals and an arms company “responsible for supplying Russia with suicide drones” to bomb Ukraine. “By providing these drones, Iran is actively belligerent, taking advantage of Russia’s heinous attacks on Ukrainian civilians,” the British government said in a statement.

The United Kingdom thus joins the Member States of the European Union, which adopted Thursday sanctions against three individuals and an entity supplying Russia with Iranian drones “which strike Ukraine”, announced Thursday the Czech presidency of the EU. kyiv hailed the European Union’s “rapid” response, while Moscow denounced the “pressure” put on Iran by Washington and Brussels.

Russia discusses access to prisoners of war with ICRC

Russia said on Thursday that the ICRC had permission to visit Olenivka prison, where dozens of Ukrainian prisoners of war died in unsolved circumstances in July, but that such visits were blocked by the security situation.

Since last week, Kyiv has accused the International Committee of the Red Cross (ICRC) of ‘inaction’ over Ukrainian prisoners held by Russia, and claims that the lack of visits puts prisoners at risk of torture . The ICRC meanwhile said it shared the Ukrainian authorities’ frustration, but that such visits were only possible with authorization and security guarantees.

Vladimir Putin takes to the field

The Russian president on Thursday visited a training camp for Russian soldiers mobilized in the Ryazan region, southeast of Moscow, according to Russian agencies. This is the first time since the announcement of the partial mobilization of hundreds of thousands of reservists on September 21. Russian Defense Minister Sergei Shoigu was also present during this visit.

15,000 people evacuated in the Kherson region

The Russian occupation administration in the Kherson region in southern Ukraine said on Thursday that 15,000 people had been evacuated from this territory annexed by Moscow, in the face of advancing Ukrainian troops. “The calm evacuation of residents of the Kherson region continues,” pro-Russian official Kirill Stremoussov said on Telegram.

He specifies that these 15,000 people took refuge on the left bank of the Dnieper river, which borders Kherson. Russian occupation authorities in Kherson announced the start of evacuations on Wednesday, with kyiv denouncing the measures as a “deportation” of civilians to Russia.

Ukraine on Thursday limited the electricity consumption of its population and businesses, particularly in kyiv, after several Russian strikes in recent days which have severely damaged its energy infrastructure, as winter approaches.

>> War in Ukraine: the strategy of “electric chaos”, or when the Kremlin wants to trip an entire country

In the Ukrainian capital Kyiv, Mayor Vitali Klischko has urged businesses, shops, cafes and restaurants to “save as much as possible” of their electricity consumption on lighting and illuminated advertising. “Even small savings within each household will help stabilize the country’s energy system,” he added on social media.

The Ukrainian army said Thursday it was worried about the “growing threat” of a new Russian offensive from Belarus, its northern neighbor, whose territory served as a rear base for Russian forces for their invasion of Ukraine at the end of february. “The aggressive rhetoric from the military and political leaders of Russia and Belarus is intensifying,” Oleksiy Gromov, an official with Ukraine’s military staff, told reporters.

“The threat of a resumption of the offensive on the northern front by the Russian armed forces is growing,” he said, as Moscow and Minsk launched a joint military force in recent days. According to him, “this time, the offensive could be (launched) west of the Belarusian border to cut off the main supply routes for foreign weapons and military equipment” arriving from western Ukraine, in particular through Poland.

Volodymyr Zelensky on Thursday urged writers to describe the “terror” imposed by Russia, in a speech broadcast at the Frankfurt Book Fair (Germany), one of the main world publishing meetings. “Instead of importing culture, Russia imports death”, denounced the Ukrainian president in a speech broadcast during the event which this year offers a close-up on Ukraine and its authors.

“I therefore ask you, please, to do everything so that people know about the terror that Russia has brought to Ukraine”, launched the Ukrainian leader, for whom “knowledge is the answer”. “Books, screenplays, articles, reports, these are the answers,” he said.

Russia’s “scorched earth tactic” “only strengthens the determination and perseverance of Ukraine and its partners,” German Chancellor Olaf Scholz told the Bundestag on Thursday. “The terror wrought by Russian bombs and missiles is an act of desperation,” added the German Chancellor, speaking to MPs ahead of the start of an EU summit in Brussels.

Today News Post - October 27, 2022 0
While tensions between France and Germany have not yet fully subsided on Wednesday, October 26, what impact can they have on a European scale?...