By opening the scoring in Argentina’s victory over Australia on Saturday in the round of 16, the PSG striker finally opened his goal counter in a World Cup playoff match 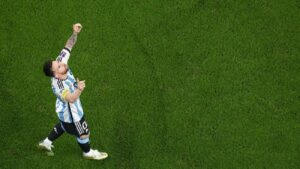 Lionel Messi all to his joy with Argentina, during the round of 16 of the Argentina-Australia World Cup, December 3, 2022. (AP).

One again. Number 789 exactly. But this one has a special flavor. Lionel Messi’s goal against Australia on Saturday, December 3, did not simply guide Argentina to success (2-1) in the round of 16 of the 2022 World Cup. It is his very first in the final phase of the World Cup. world. During its first four participations, “La Pulga” had remained systematically silent once past the group stage.

After 23 shots without scoring in an eliminatory match at the World Cup, a half-chance after 30 very closed first minutes was enough for him, mischievously rolling the ball – obviously with his left foot – without leaving the ground, to place it out of reach of the Australian goalkeeper, Mathew Ryan (35th). A minute earlier, it was he who had allowed his team to settle near the opposing surface by forcing Aziz Behich to concede a touch, with a surprising shoulder blow. Barely had he had time to open his arms, in a sign of sweet deliverance, than his teammates threw themselves on him. With pats on the head, the latter undertook to show him the importance of the moment.

Rewarded for their devotion, not once slowed down by the quiet rhythm of the start of the match, the Argentine fans then rained down the traditional “Messi, Messi, Messi”. Then, jumping with both feet, they tested the solidity of the Ahmed Ben-Ali stadium. It must be said that they stampeded. An hour before the kick-off of the meeting, thousands of “Lionel Messi n°10” piled up in front of the doors. Hinchas or foreigners, real or fake jerseys on their shoulders, all waiting for only one thing: to attend the 1,000th game of the career of the seven-time Ballon d’Or, hoping that it will not be the last their idol in the Cup of the world.

Despite a scare at the very end of additional time, and Garang Kuol’s shot stopped in a handball goalkeeper style by Emiliano Martinez (90th + 5), the party was not spoiled. It even almost never stopped as the Argentinian fans continued to sing almost twenty minutes after the final whistle. It doesn’t matter that Lionel Messi’s two caviars were not converted by Lautaro Martinez just before (89th, 90th), among other high-class actions by No. 10. Now that the biggest anomaly of the career of “La Pulga” has been erased, all that remains is for him to go and get the last trophy missing from his list, eight years after having touched it with his finger, during the final. lost in Brazil against Germany.