Herve Renard’s Saudi Arabia created the first surprise of the World Cup on Tuesday by winning against Argentina (2-1). 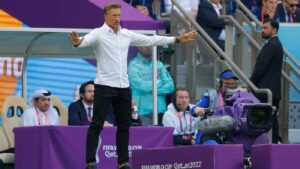 This is the feeling of this start to the World Cup, and it is the work of a Frenchman. At the Lusail stadium, Herve Renard’s Saudi Arabia defied all odds by beating Argentina (2-1).

After a modest career as a player and only one Ligue 1 match played with Cannes, the native of Aix-les-Bains began coaching at the very bottom of the ladder. In 1998, Herve Renard was appointed, at only 30 years old, coach of Draguignan (National 3), while managing his business of cleaning villas on the Cote d’Azur. “I did not work in a mine in the north of France, he confided to AFP, but I had a difficult job. Like many people who have to get up early to go to work and have to busy days.” Accustomed to starting work at 3 a.m., the former defender was therefore not afraid when the call from the sidelines caught him on the other side of the planet.

In 2001, Herve Renard became Claude Le Roy’s assistant at Chinese club Beijing Chengfeng, then began his career as head coach at Cambridge (2004) and Cherbourg (2005-2007), before joining Le Roy in Ghana ( 2007-2008). An experience alongside the former coach of Cameroon and Senegal, which was the starting point of a long adventure on the African continent. Between 2008 and 2019, Herve Renard trained Zambia, Angola, USM Alger, Cote d’Ivoire and Morocco. An African career interspersed with two freelances in Ligue 1 at Sochaux, which he did not save from relegation (2013-2014), and in Lille where he was sent back in the fall (2015). Since July 2019, the man in the white shirt has been at the head of Saudi Arabia, he who had also had an Asian experience during a short stint in the Vietnamese team of Nam Dinh in 2004. Instability on the benches which does not mean a lack of results.

Congratulations to the team and the staff for this game, I dedicate this victory to the Saudi people. We are waiting for your support next match! 🇸🇦🦅💚#HervéRenard #SaudiArabia #WorldCup #Alhamdulilah pic.twitter.com/FOUts999gr

A veteran of exploits

Apart from failures at Sochaux and Lille, Herve Renard has won almost everywhere he has gone. At the top of his list is his two African Cups of Nations (CAN) won with Zambia (2012) and Cote d’Ivoire (2015) – a record for a coach with two different selections – as well as a qualification of Morocco for the 2018 World Cup, 20 years after the last participation of the Atlas Lions. If his record with Saudi Arabia remains blank, the victory against Argentina, which remained on 36 consecutive games without defeat, is undoubtedly the greatest feat of arms in the history of the Falcons. A feat that Herve Renard put into perspective: “It’s a historic, memorable victory, which opens up prospects for us, he explained at a press conference. But I know the Saudi players, they tend to fly away , not to touch the ground again. I will stay on their backs. We have not become the best team in the world”. But it can become the second Saudi selection to reach the knockout stages of a World Cup, after that of 1994.