The Germans conceded a draw in the clash against Spain (1-1) on Sunday and no longer have their destiny in hand before the third and final match of the group stage. 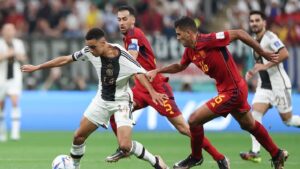 Jamal Musiala, ball at his feet, pursued by Rodri and Sergio Busquets, during Germany-Spain (1-1), November 27, 2022 in Qatar. (CAN/XINHUA/MAXPPP CAD)

Germany has not lost, but its fate is no longer in its hands. In the shock of the first round of the World Cup against Spain, the selection of Hans-Dieter Flick tore away to get the point of the draw at the end of the match (1-1), Niclas Füllkrug (83rd) responding to the opener of Alvaro Morata (62nd). An insufficient result which does not rule out the threatening specter of a second consecutive elimination from the group stage, four years after the World Cup in Russia. To escape this disastrous fate and participate in the round of 16, Thomas Müller and his teammates will have to win in their last match, against Costa Rica, and hope that Japan does not win against Spain at the same time. .

At the end of the evening, the Germans will be able to harbor regrets as they did not go far from overthrowing, at the end of the meeting, the most prominent team of the first day. But a big step forward was made after the completely failed entry against Japan on Wednesday (1-2). By hanging La Roja, they force their evening opponents to have to fight on the last day, which could change everything on Thursday, at the time of the accounts.

He will probably have missed other Jamal Musiala in this team to tip the game on the right side. Like a tightrope walker in the middle of the red tide, the 19-year-old prodigy was the main German threat for 90 minutes. It is also his oriented control that made the difference on the equalization of his teammate Füllkrug. But we will also note his involvement in the very numerous sequences of counter-pressing which Germany deliberately abused to try to prevent Spain from confiscating the leather in its camp.

During the first hour of play, the clash did not really keep its promises, as the first goal was long overdue. German defender Antonio Rudiger thought he opened the scoring, with a close range header from a Joshua Kimmich free kick, but the VAR caught up with him, invalidating the goal due to offside (40th). At this moment, in the stadium, the announcement of the cancellation made more noise than when the ball crossed the line. It was then that we realized that the Spaniards had as much of an advantage in the stands as in possession of the ball (64% at the end).

Spain, for its part, had a much more complicated evening than the trip against Costa Rica. Until she was caught in the score, we could say that she was becoming an even more credible contender for the final coronation, but the last ten minutes saw her lose her means and not go far from the disaster scenario. Against Japan, a draw will be enough to qualify for the knockout phase, but it will not be necessary to play with fire.

Today News Post - November 19, 2022 0
Sophie Cais, however, believes that "human means" have been put in place to be able to examine the situation of all migrants. She denounces...

World Cup 2022: the French celebrate the victory of the Blues against England