The Blues face Australia on Tuesday for their entry into the 2022 World Cup, an opponent they know well, but who is nevertheless changing.

The Australian selection poses for its official photo for the FIFA World Cup in Qatar, November 18, 2022, in Doha. (AFP)

Bis repeated. As in 2018, the Blues start their World Cup with a southern shock. France-Australia is the first poster for the men of Didier Deschamps in Qatar, Tuesday, November 22. We take the same ones and start over like in 2018, then? It’s not nearly as obvious for the world champions, and perhaps even more so for the Socceroos. Here is what you need to know about the opponent of the Habs.

In Qatar, thanks to their guardian angel

Australia’s showing up in Qatar is largely down to one man: Andrew Redmayne. The Sydney FC goalkeeper, however, has only four selections, at 33, and may well not play a single minute at the World Cup, preceded in the hierarchy by captain Mathew Ryan, the only player of the 26 Australians called to have played in the League. champions this season (with Copenhagen). It is however the first hero of the qualification during the dam against Peru last June.

Launched at the very end of extra time, his technique to destabilize the opposing shooters, like a disarticulated puppet dance, ended up disturbing the Peruvians who had missed two of their shots on goal, the last stopped by Andrew Redmayne. Improbable, almost comical, but historic for its selection, qualified for the fifth consecutive edition.

A contested but revolutionary coach?

This surprising choice of the entry into play of Andrew Redmayne is the work of Graham Arnold, the national coach. The former player is however far from unanimous, chastised for his management of certain players and weakened for his inconsistent results. However, he is on the way to succeeding in the mission entrusted to him after the 2018 World Cup: to continue to send his people to the World Cup while considerably rejuvenating the workforce. To do so, Graham Arnold chose to wear a double hat, that of manager of the A team and the Australian under-23 team.

After qualifying them for the final Tokyo Games for the first time in 12 years, culminating in a victory over Argentina, the 59-year-old coach has relied on this pool of new blood to build his team in view of Qatar. Nine of the last Olympians are on the trip and 10 of the 26 players called up are under 25 years old. This new generation, a large part of which plays in Europe, will be closely monitored.

A more multicultural team than ever

The Australian selection was formed as always thanks to the many influences that characterize the population of the island. Contingents with Italian, Eastern European or even Greek roots are always well represented. The Pacific team now also draws on the waves of migration from Africa in the 2000s. Winger Awer Mabil (27), one of the team’s stars and the author of the shot on goal in the qualifying match against Peru, was born to Sudanese parents in a refugee camp in Kenya. “It’s just the beginning, he assured the Australian Daily Mail. I think it will make everything better: the A-League, the Socceroos, the whole country. It’s just a question of time.”

At his side, the new promise of Australian football is called Garang Kuol, sensation of the local championship, the A-League and called up for the World Cup… without having started a single time in the professionals! At just 18, the striker (six goals, three assists in 12 games) will join Newcastle after the competition. 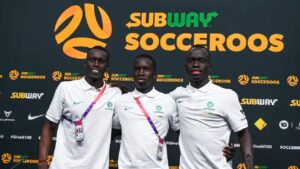 Thomas Deng, Garang Kuol and Awer Mabil, the three selected for the Australian national team for the 2022 FIFA World Cup in Qatar with Sudanese origins. (AFP)

The continuation of an equally incredible journey, from his parents’ flight from Darfur and his birth in a camp in Egypt, to an exhibition match against FC Barcelona last May where he caught the eye of the Catalan coach, Xavi. Before a possible bright future and an international showcase of the Australian societal model.

Today News Post - September 26, 2022 0
Just know how. Unfortunately, not all of us are blessed with full hair and long eyelashes. A few tricks can work wonders. With this great...