The recipe that allowed the Blues to quickly qualify for the round of 16 should not be changed following the match against Tunisia on Wednesday, regardless of the performance of the players. 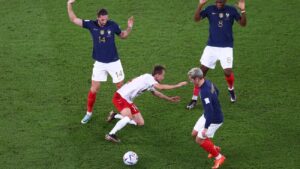 “It’s not tomorrow’s game that will change anything. It’s important but not decisive for us.” In a press conference, Didier Deschamps minimized expectations on the eve of the last group stage match of the Blues, Wednesday, November 30, against Tunisia. First qualified for the round of 16 thanks to its two successes against Australia (4-1), then against Denmark (2-1), his team could not have dreamed of being more serene at this stage of the World Cup. . The coach is also in a kind of peace.

Whether his players are disappointing or easy on Wednesday, he will rely on the achievements of the first two games to establish his composition in the round of 16. After long months of annoyances, between results at half mast and waves of injuries, “DD” has achieved the feat of finding a recipe that works on the day of the exam, in full competition. The Varane-Upamecano hinge, the system with four offensive players, the Tchouameni-Rabiot-Griezmann midfield… All these achievements will be kept for the eighth and there is little chance that they will be called into question against Tunisia. for the simple and good reason that Deschamps will largely reshuffle his team.

“There will be changes. How many? You won’t know,” summed up the coach. After his plans were guessed and revealed during the first two days, Didier Deschamps shows the firm intention not to give any clues. By way of comparison, he had made six changes to his starting XI at the 2018 World Cup, and seven in 2014 – both times the Blues had already qualified before the third match of the group stage. “The data is not quite the same today,” he added to maintain the vagueness.

Even the first place in the group, not yet acquired (to finish 2nd, the Blues must lose and Australia win by recovering from a deficit of six goals on goal difference), does not make him blink: “We didn’t not necessarily need to go for an extra point in absolute terms, but the team that will play tomorrow will have to make sure to obtain the best possible result, without having any obligation”, slowed down Deschamps.

Give executives a breather, involve replacements

Consequently, the composition of the team that will play the round of 16 raises very few questions. After Tunisia, we can expect the team that played Denmark to be the same, with one exception: the identity of the right-back no.1. After Benjamin Pavard’s failed match against Australia, Jules Koundé did not convince enough against the Danes to recover the place. With the threat of suspension hanging over him, Deschamps could play it safe and offer Pavard a chance to redeem himself against Tunisia.

Beyond the individual positions, the match against Tunisia presents three interests for the coach: to protect his executives from possible injuries, to involve a larger part of his workforce and to test some tactical adjustments by taking advantage of facing an opponent who must give everything not to leave Qatar. But it should be noted that in 2018, when the Blues were crowned in Russia, none of the players lined up against Denmark had upset the hierarchy and the starting lineup for the final was exactly the same as that for the second match (1 -0 against Peru, in the first test of 4-2-3-1 with Blaise Matuidi on the left side).

Today News Post - January 4, 2023 0
The favorite, Kevin McCarthy, collected only 203 votes out of the 218 necessary. The Republican Party is torn between a moderate wing and a...