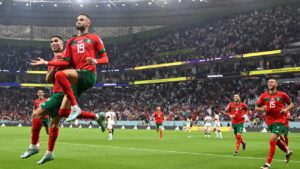 Moroccan Youssef En-Nesyri celebrates his opener against Portugal in the quarter-finals of the World Cup on December 10, 2022. (AFP)

A resounding feat. After extinguishing the Spaniards, the Moroccans added Portugal to their roster. The Atlas Lions created a surprise on Saturday, December 10, in the quarter-finals of the 2022 World Cup. By the smallest of the gaps, Walid Regragui’s players disposed of the Portuguese (1-0), thanks to the goal from Youssef En-Nesyri (42nd) and defensive solidity to contain the opposing attacks. The first African team in history to reach the last four of a World Cup, Morocco will face the winner of the match between England and France on Wednesday.

Long frustrated, the players of Fernando Santos lacked creativity and efficiency. And if they kept their foot on the ball and camped the Moroccan penalty area, they were never able to surprise the excellent Moroccan goalkeeper. Above all, they were very often overwhelmed by the speed of Walid Regragui’s players, who could have increased the score several times.

Opposed to the strike force of the Portuguese (Fernandes, Ramos, Felix …), who had humiliated Switzerland in the round of 16 (6-1), the Atlas Lions thus confirmed their status as the team having conceded the least goals since the start of the World Cup (only one in five games). Despite heavy legs after the hundred and twenty minutes played against the Spaniards in the previous round, the Moroccans never relaxed their vigilance. Even ten against eleven, during the eight minutes of added time, after the expulsion of Walid Cheddira (90th).

At the very end of the match, the Portuguese threw their last strength to find the fault. In vain. Cristiano Ronaldo stumbled against the best goalkeeper in La Liga last year, who caught in two stages the strong strike from the Portuguese captain who entered in the 50th minute of play. Pepe meanwhile missed the target with a header (90th + 7 ), while the Moroccan bench was already beginning to exult.

Among the favorites announced for the 2022 World Cup, the Portuguese leave the competition at the end of the quarters, one round better than in Russia. But far from the expectations placed in this team with a flamboyant attack. Like Neymar the day before, Cristiano Ronaldo left the lawn in tears at the final whistle, for what could be his last match for the selection.

Today News Post - December 22, 2022 0
The Ukrainian President was in Washington on Wednesday, December 21, for the first time in 10 months of war against Russia. All honors were...

Germany: three years after the burglary of a museum in Dresden, the police are still looking for part of the loot