The quarter-final between France and England was followed everywhere in France, with family or friends, on Saturday 10 December. 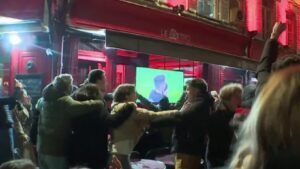 In the middle of a terrace in Amiens (Somme), cold supporters supported the Blues during the quarter-final of the World Cup between France and England, Saturday December 10. At the foot of the cathedral, the supporters could exult: France is qualified for the semi-finals. “France will win the World Cup twice!” Says a fan.

Goals from by Aurelien Chouameni and Olivier Giroud celebrated

But before the celebration, there was apprehension. At the very start of the match, in Bondy (Seine-Saint-Denis), the city of Kylian Mbappe, the children of the club were a little worried. The name of the local hero was chanted, but it was Aurelien Chouameni who, by scoring a first goal, made Bondy leap. England’s Harry Kane then equalized with a penalty. In Ouistreham (Calvados), a few English celebrated discreetly. In a room in Froges (Isere), the village of Olivier Giroud, the tension was extreme before the goal of the deliverance signed… Giroud. After a last missed penalty for England, France was able to qualify, to the delight of the fans.

Today News Post - January 4, 2023 0
According to Dmitry Rogozin, the shrapnel that injured his back was fired from a French Caesar cannon supplied to kyiv. The head of the Russian...