It is one of the deadliest conflicts on the planet: the war in northern Ethiopia in East Africa has been going on for two years. For the first time, direct negotiations are opening in South Africa, between the government and the rebels of Tigray. 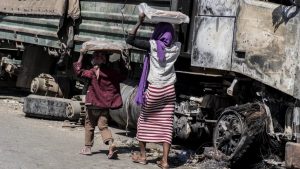 It is a note of hope in a forgotten conflict, almost neglected by the international community, especially since the start of the war in Ukraine. Negotiations, after a false start in early October, finally start on Monday, October 24, in a secret location in South Africa.On the one hand, the delegation of the government of Abiy Ahmed, who started hostilities two years ago in this country of 115 million inhabitants twice the size of France. This decision was then surprising from a man who had just won the Nobel Peace Prize. On the other, the representatives of the rebels from the Tigray region, six million inhabitants in the north of the country; they refuse to recognize the authority of the central power in Addis Ababa. They arrived first, on Monday morning, in South Africa.

The objective of these negotiations is threefold. First, restore a truce with an immediate cessation of hostilities: the previous ceasefire had lasted five months from March to August 2022, before the power launched a new offensive almost two months ago now. Second objective: to allow the delivery of humanitarian aid in the region. And finally, this will be by far the most complicated, last objective: to seek a political solution. The rebels of Tigray aspire to independence, but the Ethiopian power feels strong from these latest military victories. He has to reckon with a cumbersome ally, the neighboring country of Eritrea, fiercely opposed to the Tigray rebellion. But the opening of these negotiations is already an event in itself!

This conflict is therefore somewhat forgotten, even though it is very deadly, much more deadly for example than the war in Ukraine, and to say that is not to minimize the drama underway on European soil. According to UN and US State Department estimates, the conflict over the past two years has claimed 500,000 lives. The vast majority of them due to lack of care or malnutrition. The number of displaced people is approaching two million. But it is impossible to put forward precise figures, because the region is completely cordoned off, forbidden access to journalists and humanitarian workers.

On the other hand, all the testimonies agree in describing the worst of the war: rapes, torture, bombardments of civilians and the establishment of an organized famine throughout the region. The number of deaths from malnutrition among children has increased by 1500%. And NASA images dramatically show how the power supply has gradually disappeared in a town like Mekele.

The good news is also that the mediators seem determined to finally get going. The African Union is at the forefront. It is the inviting power of these negotiations. With two key mediators, two political figures from the African continent, two former presidents: the Nigerian Olusegun Obasanjo and the Kenyan Uhuru Kenyatta. The United States is also very involved, via its envoy Mike Hammer. Washington has an important lever: it is economic aid to the Ethiopian government, an aid which the power of Abiy Ahmed today badly needs. The country is heavily indebted.

On the other hand, the European Union is an absent subscriber in this affair. While Russia, as often on the African continent, hopes to get the chestnuts out of the situation.