The destruction of the Amazon rainforest is accelerating: in 2022, there were more fires in Brazil in 9 months than in all of 2021. The result of Jair Bolsonaro’s policy, but also of our European meat consumption . 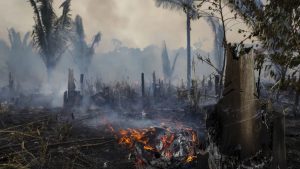 A quarter of the Amazon rainforest is irreversibly destroyed, according to a report presented by indigenous leaders in September 2022. And “planting trees” will not be enough to recreate the richness, complexity and biodiversity of this 55 million-year-old forest years. The one that was once nicknamed the “green lung of the planet” because it captured more than 10% of global CO2 emissions, released between 2010 and 2019 18% more than it had absorbed. A drama directly linked to global warming and deforestation.

Deforestation in Brazil concerns us directly

The elections to be held in Brazil on October 2 and 30 will be decisive for the future of this jewel of nature, because if Lula wins against current President Jair Bolosonaro, he will be protecting the Amazon a national cause.

But we Europeans also have our say. A good part of the deforestation is due to the breeding of oxen, which are exported to Europe, and to the cultivation of soya, used in particular to feed the poultry on our soil. Our consumption of meat and leather therefore have a direct impact on deforestation.

Today News Post - November 9, 2022 0
This central African country, the continent's largest economy and most populous country, has been hit by historic floods that hardly anyone talks about. A man...