A pileup that occurred Tuesday, October 25 on the A13, in the Eure, cost the life of a gendarme. The vital prognosis of another soldier is engaged. 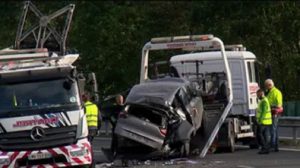 Before addressing the deputies, the Minister of the Interior Gerald Darmanin asked the National Assembly for a moment of meditation on Tuesday, October 25. He wanted to pay tribute to the 47-year-old gendarme killed in the Eure the previous night, on the A13. “His widow now has four children, whom she will raise, I hope, in direct contact with the State, which will be there. I will go to preside over his funeral. We obviously think of all the police and gendarmes who die in operation, on mission and in service today”, he declared in front of the hemicycle, which unanimously stood up.

The balance sheet of this impressive accident amounts to one dead and seven wounded, including another soldier, transported to the hospital in absolute emergency. His vital prognosis is still engaged on Tuesday. The tragedy occurred near Bouquelon, in Eure. Shortly before 3 am, the GIGN intercepts a car suspected of transporting drugs. While the gendarmes are making the arrests, a 44-tonne refrigerated truck loses control and hits the device put in place during the arrest of the suspect vehicle. Two investigations have been opened to establish the precise circumstances of the tragedy.

Today News Post - November 21, 2022 0
Scenes of revolts take place in China, as in the city of Canton. Chinese people demonstrate against the zero-covid policy and the successive confinements...