These investigations are carried out at the express request of Ukraine, accused by Moscow of preparing a radiological weapon in the greatest secrecy. 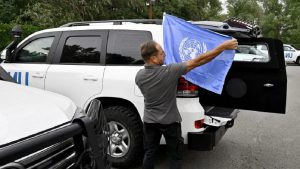 It is an extremely sensitive mission. The International Atomic Energy Agency (IAEA) announced on Monday October 31 that its teams had begun, at the request of Ukraine, new inspections in this country which Russian President Vladimir Putin has accused of erasing evidence. preparation of a “dirty bomb” – a term which generally refers to an explosive device containing diverted radioactive materials.

Two Ukrainian sites are thus concerned, said the IAEA on Twitter, without specifying either the nature or the location of these points of interest. The conclusions of this investigation are expected “later in the week” and will be communicated by the director general of the agency, Rafael Mariano Grossi, the IAEA said in its press release.

Since October 23, when Russia began issuing these “dirty bomb” accusations, Ukraine and its allies have been crying lies and blackmail. “Nobody would be fooled” if Moscow used this argument for an escalation of the conflict, for example reacted Washington, Paris and London, in a joint press release. India and China have chosen not to react to alerts from Russia, which claims to have sent them its “evidence”.

On Monday, October 31, German Chancellor Olaf Scholz in turn strongly rejected Russia’s accusations. After speaking with Volodymyr Zelensky for two hours by phone, the German leader said he has confidence in the IAEA, believing that its ongoing inspections will help to remove doubts about the use of radioactive materials in the Ukrainian counter-offensive .

Today News Post - November 15, 2022 0
What remedies are most likely to overcome the symptoms of colds and acute respiratory viral infections? How to protect yourself from this seasonal ailment...