This is a record that could have a major influence on the country’s political landscape. 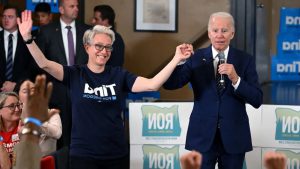 For the first time in the history of the United States, lesbian, gay, bi or transgender people are candidates for the midterm elections in each of the 50 American states. This is a record that could have a major influence on the political landscape of the country, according to an analysis published on October 26 by the LGBTQ Victory Fund (article in English), which helps fund LGBT + political campaigns.

Some 678 LGBT+ people are candidates in the November 8 elections, a ballot in which the Americans will renew all the seats in the House of Representatives and a third of the Senate. A whole host of gubernatorial and local elected positions are also at stake. These 678 candidates represent an increase of 18.1% compared to the last election in 2020. About 90% of these candidates are from the Democratic camp.

Among the notable candidates, Democrats Tina Kotek and Maura Healey could become the first lesbian governors of their respective states, Oregon and Massachusetts. And in the state of Vermont, bordering Canada, Becca Balint has a good chance of becoming the first lesbian in this state elected to the House of Representatives. For Annise Parker, former mayor of the Texas city of Houston and head of the LGBTQ Victory Fund, this record number of candidacies, validated by primaries, is a reaction of American voters “to the relentless attacks targeting the LGBT community this year ” .