On Thursday November 3, US President Joe Biden warned of a possible knockout in the United States after the midterm elections which will take place on Tuesday November 8. 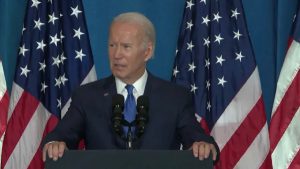 The midterm elections which will take place on Tuesday, November 8 in the United States are worrying American President Joe Biden. During a speech, the latter wanted to reassure about the regularity of this election. The 46th President of the United States has responded to Republican candidates who have already announced that they will contest the ballot. “It paves the way for knockouts in America. It’s unprecedented, it’s illegal and un-American,” said Joe Biden. These voter fraud rumors were spread by former White House tenant Donald Trump.

The economy worries the American electorate

The Republican candidates have also taken up these rumors of fraud, criticizing in particular the postal voting system. Thus, Steve Bannon or even the Republican candidate in Arizona, Kari Lake, denounced possible fraud. In several American states, voters have been intimidated by armed or hooded men. Rising inflation is worrying Americans and the economy is their number one concern according to polls. To help Joe Biden, former President Barack Obama participated in several meetings.

Today News Post - November 13, 2022 0
Civilians are not yet allowed to return to Kherson, the city recaptured from the Russians after their retreat. But elsewhere, the inhabitants are in...