Friday November 4, the JT of 20 Hours offers 24 hours of news in the world. On the program, Olaf Scholz on a diplomatic visit to China, or Donald Trump who announces his wish to run for president in 2024 in the United States. 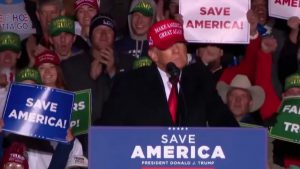 German Chancellor Olaf Scholz was visiting Beijing (China) on Friday 4 November. Accused of going it alone by the Europeans, criticized as far away as Germany for risking his country’s dependence on China, he is walking on eggshells. Its objective: to sign contracts while giving the exchange on the diplomatic level.

In South Korea, a new show of force on Friday. The country has launched fighter jets after detecting 180 North Korean fighter jets not far from its border. A standoff from a distance, at the risk of an incident. Seoul and Washington (United States) conduct joint military exercises, a dangerous provocation for North Korea.

In the United States, Donald Trump no longer hides his ambitions for 2024. “Now, in order for our country to succeed, be safe and be able to shine, I will most likely represent myself”, launches the former American president to the crowd. A declaration of intent which comes before the mid-term elections on Sunday, November 6. A crucial ballot for President Joe Biden, still weakened.

Today News Post - November 19, 2022 0
The 38-year-old entrepreneur claimed to have developed a revolutionary machine for performing blood tests. The scam was exposed in 2015. Elizabeth Holmes, on November 18,...