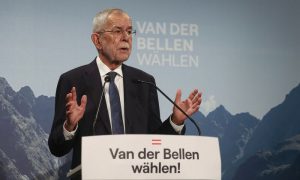 Austria holds a presidential election on Sunday that is expected to be won by incumbent Alexander Van der Bellen, seen as a beacon of stability as the Alpine country struggles with an energy crisis and high inflationVan der Bellen, who emphasized “clarity” during his campaign, is tipped for a second six-year term, while his six rivals, all men, are well behind him.

“The biggest competitor on Sunday will be the couch,” the 78-year-old economics professor said Friday at his final campaign rally, urging people to turn out to vote.

Polls show that the pro-European liberal should win more than 50% of the vote and avoid a runoff.
About 6.4 million people have the right to vote. people out of 9 million of the country’s population.

Polling stations in Vienna and most of the rest of the country opened at 7 a.m. local (8 a.m. Lithuanian) time, and several doors opened already at 6 a.m. in the morning (7 a.m. Lithuanian time).

They will be open until 17:00. local time (18:00 Austria time), and the results of the voter polls are awaited after they close.
The former Green Party leader, whose posters touted him as the “safe choice in turbulent times” as the energy crisis stokes inflation across Europe, is running as an independent.

However, he is openly or implicitly supported by all the main parties in Austria, except the far-right Freedom Party (FPOe), which has nominated Walter Rosenkranz as its candidate. In the polls, the latter takes the second place, 15% of voters promise to vote for him.

The 35-year-old punk rocker Dominik Wlazny, the founder of the satirical beer party, is also running for the post of president.

Van der Bellen, affectionately known as “the professor” by his supporters, faced an unexpectedly tough fight in the 2016 election, only winning in the second round, defeating the FPOe candidate.

However, since 2019, the FPOe’s ratings have plummeted, following the collapse of the government they were part of in a corruption scandal, and ultimately the resignation of then-Chancellor Sebastian Kurz himself in 2021.

Analyst Thomas Hofer said it was “very important” that Van der Bellen avoids a runoff like in 2016, when the campaign was “very divided and hostile”.

“Van der Bellen stands for integrity and stability, which appeals very much to voters given the many crises many European countries are currently facing,” Julia Partheymueller, a political analyst at the University of Vienna, told AFP.

A. Van der Bellen, who is famous for his professorial manner, will become Austria’s oldest sworn head of state if he wins.

The role of the president in Austria is largely representative.

A. Van der Bellen, also known by the nickname Sasha, which indicates his Russian roots, was born in Vienna during the Second World War to a Russian aristocrat and an Estonian who had escaped from Stalinism.

A year later, with the arrival of the Red Army, the family was forced to flee to the southern land of Tyrol, where Van der Bellen spent an “idyllic childhood”.

Today News Post - October 31, 2022 0
Unveiled on Thursday October 27, the route of the Tour de France 2023 is particularly demanding. The runners will cross the five mountain ranges...