The torrential rains that have been falling on several regions of Brazil for days have caused floods and landslides. 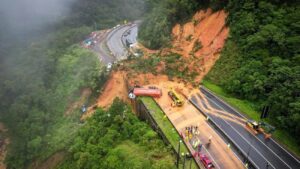 A road affected by a landslide in the state of Santa Catarina in Brazil, on November 30, 2022, after torrential rains. (AFP)

Research continues. The torrential rains that have affected several regions of Brazil for several days have left two new dead and more than 4,000 people displaced, the authorities announced on Thursday, December 1.

In the state of Santa Catarina, the rains caused flooding that killed two people. One person was electrocuted and another was buried by a landslide, according to local civil defense. A firefighter is still missing. Images released by the authorities showed entire districts of the city of Sao Joao Batista, flooded by the flood. To date, authorities in Santa Catarina have reported more than 1,000 displaced while in Bahia state, more than 4,000 people have been forced from their homes.

A landslide on Monday on a highway in a mountainous region of Parana state killed at least two people. On Thursday, firefighters continued to search for missing people under the mud. Their number “has been reduced to less than thirty”, indicated the government of Parana. Initially, the authorities estimated at “between 30 and 50” the number of people missing.

Today News Post - January 1, 2023 0
Former Pope Benedict XVI was German and lived for several years in Regensburg. The Catholics of the city wanted to pay homage to him...

“All the windows were destroyed, the ground completely flooded”: after the ransacking, the long restoration of the presidential palace in Brazil