Imprisoned in Russia for more than eight months for cannabis trafficking, the double Olympic gold medalist, sentenced to 9 years in prison, saw her appeal rejected on October 25. 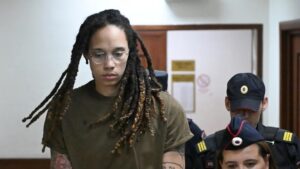 Basketball player Brittney Griner before a hearing at the Khimki court on August 2, 2022.

New twist in the Griner case. And this does not encourage optimism for Brittney Griner, sentenced to 9 years in prison, on February 17, for drug trafficking. Already dismissed from her appeal, on October 25, the American champion was extracted on November 4 from her prison in Russia and is “on her way to a penal colony”, according to a press release published on Wednesday November 9 by her lawyers who have not “no information on where it is exactly” now or on its “final destination”.

US President Joe Biden is demanding that Moscow “improve the treatment and conditions that she may be forced to undergo” in this colony, reacted his spokesperson Karine Jean-Pierre, the latter adding that “every minute of detention what Brittney Griner has to endure unfairly in Russia is a minute too long.”

Today News Post - October 31, 2022 0
David Teurtrie, lecturer in political science at the Catholic Institute of Higher Studies, also explains that Western sanctions are having a lesser than expected...