Will Brittney Griner stay in jail? The American basketball player, double Olympic gold medalist, has been imprisoned for eight months in Russia for cannabis trafficking. A court examines Tuesday, October 25 his request for appeal. 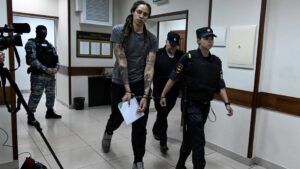 American basketball player Brittney Griner was sentenced to nine years in prison in Russia for drug possession and trafficking in Moscow on August 4, 2022. (KIRILL KUDRYAVTSEV / AFP)

In his cell, his mattress had to be lengthened to accommodate his 2.06 meters. But her androgynous figure covered in tattoos doesn’t get much opportunity to unfold. In prison for eight months, depressed, Brittney Griner even refused the basketball that her lawyers wanted to send her.

On February 17, just days before the Russian attack in Ukraine, the Phoenix Mercury, Connecticut player was arrested at Moscow airport. Since 2014, during the American off-season, the one who is considered one of the best basketball players in the world, and who, from university knew how to dunk like the boys, plays in Yekaterinburg, a stronghold of women’s basketball, to improve his salary, as many sportsmen do.

In his hand luggage, a vaporizer and two cartridges of cannabis-based liquid. Legal in USA, illegal in Russia. She pleaded guilty, and in August, she was sentenced to nine years in prison for drug possession and trafficking.

Her status as an international athlete made her a great bargaining chip as the war broke out in Ukraine. Its fate today does not depend on a court but on the negotiations between Washington and Moscow, which opposes the conflict.

The first months, his arrest is not at all publicized. Even to the point that NBA superstar LeBron James publicly wonders if the American authorities are doing enough to free her.

For a two-time Olympic medalist, two-time world champion with the United States, the silence surrounding her detention seems deafening. Across the Atlantic, some say that it is because she is a black and lesbian woman that her case is “not a priority”. Brittney Griner has established herself as one of the first female superstars in her sport, which allowed her to become the first homosexual athlete to be sponsored by Nike.

On July 4, Brittney Griner writes a letter to Joe Biden, made public by a journalist from ESPN. The WNBA star calls for help unequivocally. “I am terrified to be here forever. I realize you are dealing with so much, but please don’t forget me and the other inmates. Please please do whatever you can to bring us home,” the basketball player wrote. “On the 4th of July, our family normally honors the service of those men who fought for our freedom, including my father who is a Vietnam War veteran. (…) freedom means something completely different to me this year.”

His wife, Cherelle, is coming out in the media demanding that the White House come forward.

Brittney Griner’s wife Cherelle says it is “very disheartening” that she still has not heard back from the White House — after Brittney penned a handwritten letter to Pres. Biden from a Russian prison pleading for help. pic.twitter.com/MTyQqCJIBj

Most likely, however, is that silent diplomacy is at work and that an over-politicization of his affair risks tensing up the Russians, or even breaking off negotiations. The Kremlin has also repeatedly criticized Washington for making public statements about the negotiations in progress.

A case of “arbitrary detention”

But the severe sentence of Brittney Griner, this summer, forced the White House to speak out, to denounce “arbitrary detention” and “abusive”. The United States now accuses Moscow of using its case to extract concessions. In mid-September, President Joe Biden meets Brittney’s wife, Cherell, and assures her that he was doing everything to repatriate her.

A real support movement is starting to be more visible. On August 4, the Phoenix and Connecticut players observed 42 seconds of silence, like the player’s jersey number, before their WNBA championship game.

The site “we are Brittney Griner” (we are BG) where you can leave support dead, personalities like Hillary clinton have also asked for her release (tweet hillary).

Towards an exchange of prisoners

Discussions with Russia are underway, the terms of the negotiation are generally known (Washington claims to have made a “consequent” and “serious” offer to Moscow): Brittney Griner and another American, Paul Whelan, a former marine who is serving a 16-year sentence for “espionage”, should be exchanged for one or more prisoners.

Viktor Anatolievitch Bout, nicknamed “the merchant of death”, a trafficker who sold weapons to Al-Qaeda, the Taliban, various rebellions and militants in Rwanda, Sierra Leone. Russia has long sought to have him released.

The U.S. could release convicted Russian arms dealer Viktor Bout to secure the freedom of Brittney Griner and Paul Whelan, according to a CNN report.

In 2010, 60 Minutes reported on how DEA agents captured Bout, who's been called the "Merchant of Death." https://t.co/7AjXGCy080 pic.twitter.com/qaLUuiUmEU

Viktor Anatolievich Bout was arrested in Thailand in 2008 and is serving a 25-year prison sentence in the United States. His extraordinary career was one of the inspirations for the film “Lord of War” in which Nicolas Cage plays a cynical arms dealer.

Possibly also traded for Vadim Krasikov. Sentenced to life for having shot a Georgian from the Chechen minority with three bullets, in a park in Berlin, on August 23, 2019. He is in detention in Germany. Moscow has always denied any involvement, but German justice has explicitly designated the Russian authorities as the principals, according to the President of the Court, Olaf Arnoldi. However, for some observers, this prisoner exchange proposal would only encourage the taking of American hostages. A civilian and a marine against two murderers: some consider the terms of the agreement unbalanced. In short, there are tensions and reluctance in the American administration, which can complicate the negotiations. Brittney Griner, she attended the hearing this Tuesday remotely, by video, from her prison. She has just celebrated her 32 years behind bars.

[This Tuesday, October 25, the Russian justice rejected the appeal of Brittney Griner, during a hearing that the national security adviser of the White House, Jake Sullivan, describes as “bogus legal proceedings”]

Today News Post - November 2, 2022 0
On Saturday October 29, Russia announced to suspend the agreement which allowed the export of Ukrainian cereals. A decision that could have serious food...