The German pontiff, successor to John Paul II, marked the history of the Catholic Church by deciding to resign from his office eight years after his election. 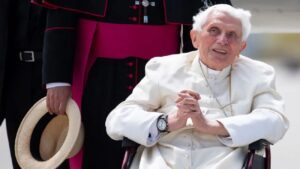 Discreet since his renunciation, he was “only” pope emeritus. Benedict XVI, real name Joseph Ratzinger, died at the age of 95. “I have the pain to announce to you that he died today at 9:34 a.m., at the Mater Ecclesiae Monastery, in the Vatican,” said the director of the press service of the Holy See, Matteo Bruni, Saturday, December 31, in a statement. “Further information will be communicated to you as soon as possible.”

Pope Francis had announced a few days earlier that his predecessor was “seriously ill”. The man who succeeded John Paul II in 2005 marked the history of the Catholic Church by deciding to resign on February 11, 2013, eight years after his election, for health reasons. An unprecedented gesture in six centuries, the previous pope having renounced being Gregory XII, in 1415.

Accused of inaction in the face of sexual assault

Born in 1927 in Bavaria (Germany) into a family opposed to Nazism, Joseph Ratzinger was enrolled against his will in the Hitler Youth. At 24, he was ordained a priest, before entering the University of Munich, where he studied theology and philosophy. In 1977, he was appointed Archbishop of Munich and Cardinal-Priest. Elected pope in 2005, at the age of 78, he confides that he was incredulous” in the face of this decision in his book Benedict XVI, last conversations (Fayard), published in September 2016. By choosing his name, the 265th pope in the footsteps of Benoit XV, an apostle of peace known for his diplomatic work during the whirlwind of the First World War.

The former close collaborator of John Paul II is quickly confronted with the most serious crisis of the contemporary Church: the cascading revelations of sexual assaults committed on children by members of the clergy, aggravated by the omerta of the hierarchy. Catholic. “The greatest persecution of the Church does not come from external enemies but arises from the sin of the Church,” Benedict XVI said in 2010. He asks for “pardon” and advocates zero tolerance.

Nevertheless, new cases of pedocrime continue to emerge. Almost nine years after his departure, an independent report even accuses Benoit XVI of inaction in the face of sexual assaults against minors in the archdiocese of Munich and Freising, which he “strictly” rejects. “On the issue of sexual assault, he did not solve the problems, but indicated correct ways to deal with them,” said Federico Lombardi, a former Vatican spokesman.

Other crises tarnish his pontificate. In 2012, the German pope had to deal with the “Vatileaks”, a scandal of leaks of confidential documents which evoked the existence of a network of corruption and favoritism between the Vatican and its Italian partners. “Insinuations have been broadcast by certain media, totally free, which have gone well beyond the facts, offering an image of the Holy See which does not correspond to reality”, reacts Benoit XVI, during a general audience.

A pope hostile to social change

Before his election as pope, Cardinal Joseph Ratzinger tracked down for 24 years everything he considered to represent a liturgical or social drift in the Church, which had earned him the nickname of “Panzerkardinal” (“armored cardinal” in French ). Once elected, this legalist does not give up on the celibacy of priests or the ordination of women. Benedict XVI remains equally hostile to a more flexible line in the face of social developments, such as abortion or euthanasia. The sovereign pontiff is also trying to eliminate escapades in a Church that he wishes to be less worldly, an objective taken up by his successor François.

But this shy music lover, praised for his kindness in small groups, does not impose himself on public opinion like the charismatic John Paul II or Francis. Lacking an iron fist, overconfident in those around him, he failed to reform the Curia (all the administrations of the Holy See), bogged down in paralysis.

Is a pope afraid of death?

Since his renunciation, the former pope has lived discreetly, retired in a monastery in the Vatican in the company of nuns and his personal secretary, Georg Ganswein. Weakened, in a wheelchair, speaking with difficulty but still lucid according to those around him, Joseph Ratzinger continued to receive visits.

In Benedict XVI, Last Conversations, questioned by the German journalist Peter Seewald on the possibility that a pope is afraid of death, the person concerned answers “yes”, in any case “to a certain extent”. “First there is the fear of being a burden on others because of a long period of disability, he explains. Then, although I believe with confidence that God will not reject me, more you get closer to Him, the more you feel with force all that you have not done well. Hence the weight of the fault that oppresses you, even if the basic trust is always present, of course.”

War in Ukraine: Vladimir Putin describes the situation in the annexed Ukrainian regions as “extremely difficult”