The Brazilian president met with the presidents of the Senate, the Chamber of Deputies and the Supreme Court to sign a declaration “in defense of democracy” on Monday evening. 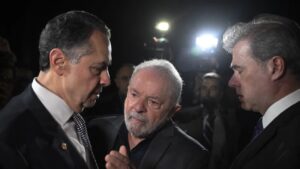 Brazilian President Lula, accompanied by his ministers and governors, on January 9, 2023, in Brasilia. (AFP)

Lula obtained widespread support from the political and judicial power of his country on Monday, the day after the invasions and ransacking of three emblematic places of power in Brasilia by unleashed Bolsonarists. “We will not let democracy escape us,” promised the leftist president Monday evening in Brasilia, before descending the ramp of the Planalto palace, the heavily damaged seat of government, surrounded by judges of the Supreme Court, members of the Congress and state governors.

Together they signed a joint statement “in defense of democracy” posted on Lula’s Twitter account. “The Powers of the Republic, guarantors of democracy and of the 1988 Constitution, reject the acts of terrorism, vandalism, criminals and putschists that occurred yesterday in Brasilia,” the statement said. “Society needs (…) serenity (…), peace and democracy”.

“The worst is over”

The condemnation also found an echo in the streets of Sao Paulo, on the emblematic Paulista Avenue, where, late at night, thousands of people gathered to “defend democracy” and demand “the imprisonment of the putschists”. . “I didn’t go through what I went through to see what I saw yesterday, that my people, my land, are divided in this way. It’s unacceptable, sad, to be here is to defend the democracy,” Edi Valladares, a 61-year-old teacher, told AFP.

“The country is returning to the path of institutional normality at high speed (…) The putschists have failed in their attempt to break the legality”, declared Monday the Minister of Justice of Lula, Flavio Dino, for whom ” the worst is over.”

As of Sunday evening, the judge of the Supreme Court Alexandre de Moraes suspended for 90 days from his functions the governor of the district of Brasilia, Ibaneis Rocha, who had just presented his apologies in a video for “the faults” of the security having allowed the rampages.

Today News Post - December 19, 2022 0
The 20 Hours presents a day of news in the world, Sunday, December 18. In Iran, actress Taraneh Allidousti has been arrested by the...