It will take many weeks for the presidential palace in Brasilia, left as a battlefield after the intrusion of thousands of supporters of Jair Bolsonaro on Sunday, to regain its normal appearance. On site, the staff are busy, exhausted and traumatized. 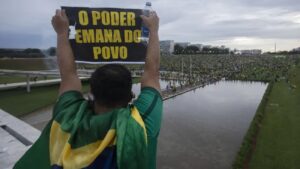 A broken window of the Brazilian Supreme Court, the day after the incidents in Brasilia, January 8, 2023. (AFP)

The time, Tuesday, January 10, was for restoration: 186 people cleaned, all day long, the Planalto Palace, the presidential palace of Brasilia, the Brazilian capital, ransacked on Sunday by the Bolsonarists who wreaked havoc in the few hours Brazil’s democracy faltered.

>> Brazil: from the demonstration to the ransacking of places of power, a look back at four hours of “chaos” in Brasilia

A titanic job and a strong emotion for the employees of this palace, built on the plans of the architect Oscar Niemeyer, listed as a World Heritage Site and which will however have to be repaired for many weeks. 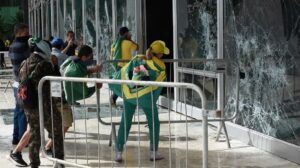 Supporters of Bolsonaro force the windows of the Supreme Court of Brasilia, January 8, 2023 using security barriers as a ram. (AFP)

The presidential palace is no longer a battlefield as the Bolsonarists left it on Sunday evening. By late Monday, much of the cleaning was complete, and the cleaning staff exhausted, both physically and emotionally. Ana Carolina continued cleaning frantically, her eyes still wet and looking lost:

“I cried a lot, I was very sad, disappointed to see this vandalism, this terrorism and these Bolsonarists. It’s very sad to see the place where we work, which was thus destroyed by this band of vandals. ”

“I was so hurt, continues Ana Carolina. I cried a lot, I can’t talk about it, I’m too moved. We must not give up, right? Democracy must win , this Brazil is for everyone, isn’t it?”

On the upper floors, Maria Da Conceiçao’s team shoveled together a pile of trash: “Glass, stone, trash, tear gas canister remnants: all that stuff…” she describes . It was really sad.” 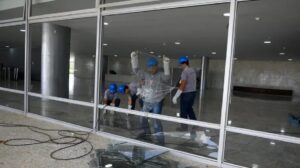 Workers are busy repairing a window in the presidential palace, in Brasilia, on January 9, 2023. (AFP)

“The entrance was totally destroyed”

Joao, who is part of the security, was one of the first to go to the scene. He too has trouble recounting what he saw. “All the windows were destroyed, the ground was completely flooded, he sighs. The portraits of the gallery of former presidents were all on the ground, with the exception of that of Bolsonaro, which someone took as a prize . The entrance was completely destroyed, the computers had been stolen and those that were still there, were all thrown on the ground, broken. That’s basically the atmosphere of last night when I arrived.

Opposite the Planalto, the Supreme Court could not be cleaned: on the ground still lie the flags of Brazil carried by the demonstrators who destroyed the heritage of their country in a few hours.

Death of Benedict XVI: in Bavaria, the inhabitants remember “one of them” and try to forget the controversies