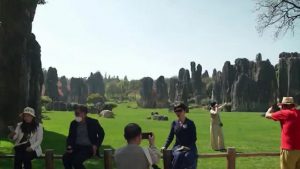 Located in southwestern China, the Shilin Stone Forest is a unique geological treasure in the world that animates the greatest legends. Very popular with Chinese tourists, it is a source of inspiration for painters and photographers.

It is as impressive as it is mysterious. In Shilin, in Yunnan Province (southwest China), a forest of stones stretches as far as the eye can see. The rocks are erect like trees. Some reach 110 meters in height, spread over 350 km². “It’s a truly sublime landscape,” marvels a tourist. To visit it, you have to pay 20 euros. In the heart of the forest, a maze has been laid out for kilometers in order to be able to visit it. His works of nature have been carved out by time.

A vast ocean that evolved 270 million years ago

Shilin Park was opened to the public in 1931. It is listed as a UNESCO heritage site. It has long been a paradise for photographers, but also for painters. “It is a geological marvel, a rare and precious heritage for humanity”, says Ang Gui, photographer. “The evolution of these stone columns began 270 million years ago. It was actually a vast ocean,” explains geologist Jao Hongxia.

Today News Post - October 22, 2022 0
The new head of the military junta has made it known that he will respect the commitments already made for a rapid return of...