At the opening of the Chinese Communist Party Congress on Saturday, the Chinese president reaffirmed his intention to “reunify” Taiwan with China, by force if necessary. 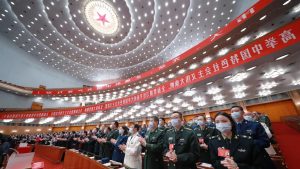 A first, which comes in a context of tensions between China and Taiwan. The Chinese Communist Party (CCP) decided on Saturday, October 22, to include for the first time in its charter a mention of Beijing’s opposition to the independence of Taiwan, according to a resolution made public at the end of the congress of the CCP.

The congress “agrees to include in the party charter statements on (…) resolute opposition and deterrence of separatists seeking independence for Taiwan”, specifies the resolution.

The party also reaffirmed, at the end of its congress, the “central role” of Xi Jinping, on the eve of the almost certain formalization of a third term for the strong man of Beijing. To stay in power, Xi Jinping had the two-term limit removed from the Constitution in 2018.

A possible “use of force”

At the opening of the CCP congress on Saturday, the Chinese president reaffirmed that he intended to “reunify” Taiwan with China, by force if necessary. “We will work with the greatest sincerity and the greatest efforts for a peaceful reunification (of Taiwan), but we will never renounce the use of force and we reserve the possibility of taking all necessary measures,” he said. .

According to US Secretary of State Antony Blinken, Beijing wants to take over Taiwan “at a much faster pace” than previously envisaged. The US military must be ready to respond to a potential invasion of Taiwan by Beijing this year, Admiral Michael Gilday, chief of US naval operations, warned Wednesday. “I can’t rule out that possibility. I don’t mean to be alarmist at all by saying that. It’s just that we can’t rule it out,” he told think tank Atlantic Council.

The Chinese Communist Party has never controlled Taiwan, but Beijing considers this autonomous island to be an integral part of its territory.

Today News Post - November 12, 2022 0
The city of Kherson is once again in Ukrainian hands. The soldiers entered the town on Friday, November 11. They were welcomed as real...