A new bill to ban bullfighting was tabled on Tuesday in France. In other countries where bullfighting is a tradition, such as Spain, Colombia and Mexico, similar laws have already been passed. 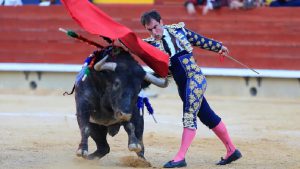 The bullfighter Vincente Soler with a bull during a bullfight in Castellon de la Plana, Spain, in 2019. (DOMENECH CASTELL? / EFE)

A new anti-bullfighting bill was tabled in the National Assembly on Tuesday, September 20, by 96 Nupes deputies. This text carried by the animalist deputy Aymeric Caron will be discussed on November 24 in the hemicycle. In France, the debate around bullfighting and animal suffering is recurrent. It is also very lively in other countries. This is the case in Colombia, Spain and Mexico, where things are moving slowly.

In Colombia, a new anti-bullfighting president

The country’s first left-wing president and notorious anti-bullfighting, Gustavo Petro took office on Sunday August 7, in a country where bullfights are still very popular. In Bogota, Medellin or Cali, there are still big bullfights that go until the death of the bull. On the occasion of all the local festivals, there are “novilladas”, “becerradas” or “corralejas” which are those shows with little bulls or without bullfighters. It is then the men of the village who descend into the arena. And there’s the “coleo”, where men on horseback grab running bulls by the tails and flip them like pancakes.

These shows are sometimes held in precarious security conditions. Last June bleachers collapsed in El Espinal, a town in the department of Tolima, killing four people.

Defenders of the animal cause continue to gain ground. In Bogota, they mobilize hundreds of demonstrators before each bullfight. And they voted for Gustavo Petro, in particular because he is anti-bullfighting. Gustavo Petro was mayor of Bogota from 2012 to 2015. At the time, he terminated the rental contract for the capital’s arenas. The Council of State reversed the decision and the bullfights resumed. But a bill is being studied which aims to immediately ban shows with the death of the bull and, within three years, all shows where there is animal abuse. The decision does not depend on Gustavo Petro, but the support of the president could weigh in the balance.

In Spain, an alliance between Catalan separatists and animal defenders

Catalonia banned bullfighting in 2010. At the time, the debates were very heated. The region is one of the cradles of bullfighting. Barcelona was the only city in Spain to have three bullrings in operation at the start of the 20th century. But in the 2000s, bullfights fell into disuse. The animal cause is progressing, but it is above all the local political context that leads to its ban.

For the separatist deputies, the majority in Barcelona, the bull represents the symbol of Spanish nationalism. We are then witnessing a form of objective alliance between animalist groups and Catalan elected officials. “It was not the cause of the animals that was at stake, it was to make the image of Spain disappear from Catalan territory and therefore the bulls, bitterly remembers Luis Corales, an aficionado.

“It’s this union against nature that worked in 2010 when bulls were banned.”

In 2016, the Constitutional Court invalidated the ban, but in fact no more bullfights took place – too complicated, too sensitive. On the other hand, there are other bullfighting shows in Catalonia. Every summer, the “correbous” are celebrated in villages in the south of the region. It involves pulling the bull with ropes and setting its horns on fire. In short, to inflict a certain number of abuses on him. Complaints for animal abuse were filed this summer against these shows.

As for Catalan bullfighting enthusiasts, they have found refuge for ten years in the south of France in Ceret, Nimes or Arles. They will therefore follow with interest the debates on the subject in the National Assembly at the end of November.

In Mexico, bullfighting is now banned in the capital

In Mexico, some states had already banned bullfights, but this time the prohibition reaches an emblematic place: Plaza Mexico, bullrings that can accommodate up to 50,000 spectators. Several politicians had already launched ban projects in Mexico City before, but without success. It was finally a judge who ruled in favor of a civil organization which demanded the banning of bullfights. The judge ruled that this recreational activity, which exposed animals to cruel treatment, unjustified suffering and death, had to be stopped.

On the one hand, this decision raised many hopes that the ban would be extended to the rest of the country. But there is also a certain resistance which is organized, because the bullfighting culture is still well anchored in certain regions of the country. Seven Mexican states have declared bullfighting intangible cultural heritage. The craze for bullfighting certainly concerns a minority of Mexicans, but it is a minority that fiercely defends its passion and is determined to have this court decision overturned.

Today News Post - November 11, 2022 0
At the heart of the standoff between France and Italy, there is the reception of migrants who have crossed the Mediterranean but also their...

In Nigeria, floods leave 600 dead and more than a million displaced, amid general indifference