Traditionally an exporter of electricity, France finds itself importing it because of the historical weakness of its nuclear production. Every day, the equivalent of several reactors crosses the border. 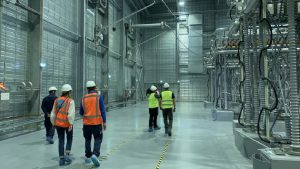 The Baixas converter station, on the French side, where the Spanish current arrives before it is injected into the French electricity network. (GREGOIRE LECALOT / RADIO FRANCE)

No pylon, no high voltage cable would indicate to hikers that they are passing next to a 320,000 volt power line. Yet, a few steps from the peak of Canigou, near Perpignan, is an eight-kilometre-long concrete tunnel. “There, we are in the tunnel in which four cables circulate, explains Etienne Serre, project director at RTE, the manager of the French electricity network. There is about 150 meters of earth. We are under the mountain .”

Commissioned in 2015, this line has doubled exchange capacity with Spain. “We can pass 2,000 megawatts between France and Spain, inside the tunnel. We consider that it is often the equivalent of two nuclear units, continues the expert. It is strategically very important because that allows mutual solidarity between the two countries. Spain has a consumption peak at 9 p.m., we at 7 p.m. 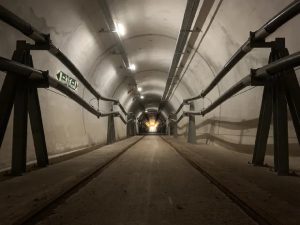 A tunnel passing under the Pyrenees, near Perpignan, in which the France-Spain power line runs. (GREGOIRE LECALOT / RADIO FRANCE)

Further on, in the Catalan plain, in the middle of the vines, the cables come out in a factory that looks like a comic strip. Gangta Djelassem is responsible for maintenance: “Here comes the voltage and the Spanish current that we will take care of adapting and injecting into the French network.” “Then, in the heart of the room, the current passes through all these conversion towers and emerges at the level of the wall. There is the same crossing system and, in the meantime, the transformation will have been made between AC and DC” , describes the manager. 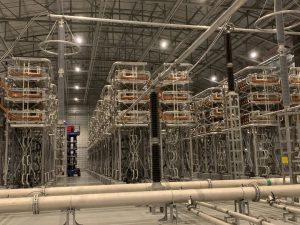 The Baixas converter station, on the French side, where the Spanish current arrives before it is injected into the French electricity network. (GREGOIRE LECALOT / RADIO FRANCE)

With a greater amount of renewable energy in its electricity production and special legislation that allows the price of electricity to be less dependent on that of gas, Spain can sell its energy cheaper than France. Without these European exchanges, electricity bills would therefore be even more expensive. And, with winter, the more tense the situation, the more the electrical interconnections will play an important role.

Today News Post - September 24, 2022 0
Bigger than you think! If you drive past power lines or just look at them from the ground, these balls don't look very big and...