The government detailed on Sunday the device to control travelers from China. And in particular the operation of the tests which will be carried out upon their arrival in France. 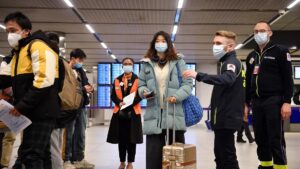 Passengers on a flight from China, on January 1, 2023, at Paris-Charles-de-Gaulle airport. (AFP)

While Beijing abruptly ended its “zero Covid” policy in early December, leading to an explosion of contamination in the country, several countries such as France decided to take control measures. The French government will therefore impose, from Thursday January 5, tests on passengers arriving from China, to limit the risk of the virus spreading.

It is a “flexible, extremely reactive device”, assured, Sunday January 1, the Minister Delegate in charge of Transport, Clement Beaune. With the Minister of Health, Francois Braun, he detailed from Roissy-Charles-de-Gaulle airport the new French control strategy in the face of the resurgence of the Covid-19 epidemic in China. We present it to you in five questions.

How does the French system work?

The decree published in the Official Journal, Saturday, December 31, specifies the methods of the controls imposed on travelers from China to France. It requires travelers over the age of 11 from China by air to present a negative test within 48 hours of boarding as well as the wearing of a mask for passengers over the age of 6 on these flights. “These travelers will also have to commit to undergoing a random screening campaign on their arrival on national territory and to isolate themselves in the event of a positive result”, adds the text.

The decree entered into force on Sunday, with the exception of the measures relating to the obligation of a negative test on boarding and the signing of a commitment to submit to a test on arrival, which will be put in place. in place on January 5. But as of Sunday, the first optional random tests were carried out on arrival in France. “This has already made it possible to test around fifteen people on the first flight”, announced Clement Beaune. These measures are currently in place until January 31, according to the decree. “If we have to extend them, they will be extended”, has already warned the Minister of Health.

How many travelers are affected?

For now, the number of people arriving from China is moderate. “We are not talking about tens of thousands” of travelers, thus reassured the Minister Delegate for Transport. “Today there are six flights that come from China on a weekly basis to France, ten if we include flights from Hong Kong.” According to Clement Beaune, this represents around 3,000 people per week, but this total includes passengers who have only transited through Chinese territory and others who only make a connection on French soil to other countries. “So we are talking about a few hundred people per week”, assures Clement Beaune.

On the other hand, flights to France and Europe from China must “progressively increase in the coming weeks”, according to the Minister Delegate for Transport, who thus justifies the need to put in place controls. “By early February, we consider that 500 to 600 additional passengers per week will be present in the territory,” he announces.

Regarding the random testing procedure, this means that all the passengers of a device will not be tested on arrival in France. “We are going to test as much as possible. Knowing that on a plane, if it was full, we would rather go on a third of the plane which would be tested”, specified Clement Beaune, adding that it would however be possible to test “a complete aircraft”.

What will happen to positive cases on French soil?

Tourists positive for Covid-19 from China will have “isolation instructions”, announces Francis Braun, the Minister of Health. “We do not prevent them from returning to the territory, but (…) they are identified, we can call them back”, he assures.

“Either they are positive before and they don’t get on the plane. Or they test positive here and we contact them again.”

“We have a whole system in place to be able to identify them, to know where [they] are going to be”, explains Francois Braun. In the event of a positive test, people will therefore be contacted to receive instructions for the usual seven days of isolation. “Of course, if they are positive with a variant that we do not know, a new variant, we will have to monitor them much more closely”, further specifies the Minister of Health.

What is the scientific value of screening?

The implementation of controls is “important in terms of confidence” and “precaution”, recalled Clement Beaune. The control on arrival is not intended to “prevent citizens from entering our territory”, but rather to monitor the evolution of the variants, for his part clarified François Braun.

The Minister of Health explains that the interest of this screening is to exercise “scientific control which will allow us to follow the different variants”. He assures that for the moment, “these are essentially Omicron variants” arriving from China. And he believes that the new device makes it possible to “protect the French from the possible emergence of a new variant, given the number of cases that there are in China”.

For Brigitte Autran, immunologist and president of the Health Risk Watch and Anticipation Committee (Covars) which replaced the Covid-19 Scientific Council a few months ago, “the only interest” of border screening is indeed ” to carry out a systematic test to analyze what type of variant is carried by positive people arriving in France. But she believes that such a device for sequencing variants is “heavy”.

How are other countries reacting?

With the implementation of controls, France is acting in unison with Italy, Japan, Spain, the United Kingdom, the United States and even South Korea, which have also imposed Covid-19 test for travelers coming from China. On Saturday, Canada and Australia joined the list of countries to take action. Some go further. Morocco will thus prohibit entry into its territory to all travelers from China as of Tuesday, January 3.

But for the moment, in the absence of European coordination, it is still possible to take a flight for certain European capitals without control, before joining France by train, admitted Clement Beaune. He also promised a European decision “within a week to harmonize the rules”. EU member states are due to discuss a common response on Wednesday.