According to the Royal College of Emergency Medicine, between 300 and 500 patients die each week due to deficiencies in the UK emergency care system. But some hospital officials relativize these figures. 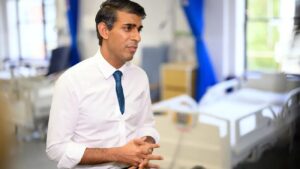 An alarming situation. Several doctors’ organizations alerted on Monday January 2 to the crisis affecting emergency services in the United Kingdom. According to them, many patients die for lack of adequate or timely care. These caregivers therefore call on the government to respond to the rising social discontent.

The British public and free health service, the NHS, is suffering from more than ten years of severe austerity and then from the pandemic, which has left it completely exhausted. This crisis, which regularly makes the headlines in the British media, was reignited on Sunday when the organization representing emergency workers, the Royal College of Emergency Medicine, estimated that between 300 and 500 patients would die each week due to deficiencies in care. urgency, including the endless waits.

More than twelve hours before being picked up

Hospital officials have put the credibility of these figures into perspective, but the vice-president of the Royal College of Emergency Medicine defended this estimate on Monday on the BBC and rejected the hypothesis of temporary difficulties. “If you’re on the pitch, you know it’s a long-term problem, it’s not just short-term,” insisted Ian Higginson.

Last week, one in five patients treated by an ambulance in England took more than an hour to be brought to the emergency room. And tens of thousands of patients had to wait more than twelve hours before being treated in the emergency room. The government questions the current situation on the consequences of Covid-19 and winter epidemics such as the flu.

The government says it wants to do more for the hospital, but it recently launched a very strict budget savings policy. He thus refuses the requests for increases requested by the nurses, while inflation has exceeded 10% for months. The latter followed their first strike action in December.