China is still unable to control the explosion of Covid-19 cases and provide decent care for the sick. An independent British organization evokes 11,000 deaths per day. 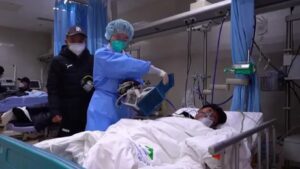 On stretchers, lie lifeless bodies at the hospital in Beijing (China), Tuesday, January 3. The images were shot by Spanish television in the afternoon. According to estimates by a British company, 11,000 Covid-19 patients die every day in China. The epidemic seems out of control. In a facility in Chongqing, the number of hospitalizations has increased five fold in recent days.

The peak of contamination’s could have been reached

In Chengdu, doctors must now triage patients. “We divide the patients into several categories: those who are unable to breathe, and whose heart does not beat anymore, are obviously the most urgent”, explains Tang Shiyun, doctor at the Chengdu hospital. The peak of contamination’s could have been reached. Some specialists speak of nearly two million people infected every day in the country.

Today News Post - October 31, 2022 0
Electricity prices are exploding everywhere in Europe, except in Spain and Portugal. The two countries have obtained a derogation from the European Union to...