While Toby Price was thinking of increasing his lead at the top of the general classification, a protest from the Argentinian Kevin Benavides changed everything. 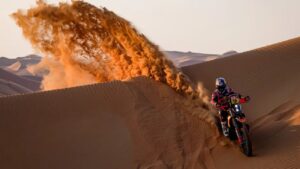 On the Dakar 2023, a Benavides can hide another on a motorcycle. While Luciano Benavides (5th overall) thought he had won the 13th stage between Shaybah and Al-Hofuf (154 km), Saturday January 14, he finally received a one-minute penalty at the finish for speeding . Michael Docherty then thought he would take advantage of this to win the penultimate special, but that was without counting on a turnaround like only the Dakar can offer.

A few minutes after the end of the day’s stage, a third winner was chosen: Kevin Benavides, Luciano’s brother. Arriving with the 31st time on the line, and 22 minutes and 43 seconds behind, the Red Bull KTM rider received a time bonus of 23 minutes and ten seconds for helping rider Matthias Walkner early in the stage. Result: Kevin Benavides pockets the 13th stage of this Dakar 2023 on a motorcycle, and at the same time returns to just 12 seconds behind the leader of the general classification, Toby Price, on the eve of the finish.

The Australian, who initially thought he had increased his lead by more than a minute over his ex-runner-up, the American Skyler Howes, fell from a height after a hectic day. “I made a small mistake at kilometer 130 by swerving and going a little too far. I also fell when I was looking up a dune. At this stage of the rally, you had to push to keep the overall lead. It was complicated because the dunes were soft and it was easy to get stuck in them. The course was also difficult to hold”, confided the KTM rider at the finish.

“The last stage is going to be very fast, I don’t think it’s possible to make a difference and today’s result is going to be decisive”, for his part analyzed Skyler Howes, now third overall, ahead of the French Adrien Van Beveren.

Today News Post - November 19, 2022 0
In the United Kingdom, it is one of the consequences of inflation, at its highest for 40 years. Filmed by a CCTV camera: thefts...