In Brazil, three days of mourning have been decreed following the death of the day legend Pele. In the city of Santos, where the sportsman has worked for a long time, admirers flock to a final tribute on Monday, January 2. 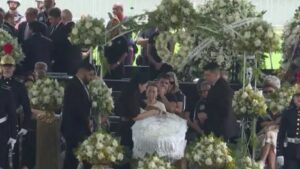 In the crowd that flocked to the stadium of Santos (Brazil), Monday, January 2, few Brazilians had already seen Pele play. But young and old chant his name before coming to meditate where the legend of the king of football began. It is on the lawn of the Santos stadium that Pele played from the age of 15 and that he won everything in club. He now rests there in a wake for 24 hours. In the front row, his wife meditates. Emotion wins over the loved ones of the deceased.

A stadium in the name of Pele in each country

The supporters march in silence. Many wear the national jersey. Entire families pass wreaths of flowers from all over the world at their feet. “It’s a very beautiful ceremony with a lot of emotions. There are a lot of flowers, all very beautiful,” said a Brazilian. Among the officials, the president of Fifa was present and wants every country in the world to build a stadium named after Pele. The former legendary player will then be buried in the family vault, just a few steps from the Santos stadium.