More than 800 minors were also injured, according to figures revealed by the attorney general’s office. Some 331 children are still missing in the country. 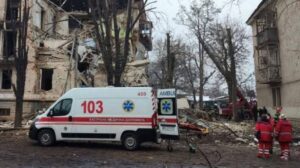 A chilling record. Ukraine’s prosecutor general’s office said on Saturday (December 17th) that at least 450 children had died since the start of the Russian invasion. Quoted by the (Kyiv Independent newspaper), the magistrate added that since February 24, 863 children had been injured. According to him, 331 are still missing and more than 13,600 minors have been deported to Russia. Follow the conflict in our live.

Ukraine wakes up in the dark. The country’s electricity network was still in great difficulty on Saturday at dawn, after a new salvo of Russian bombing. The operator Ukrenergo said on Friday that due to the intensity of the strikes, “it may take longer than before to restore electricity”. The head of European diplomacy Josep Borrell denounced “cruel and inhuman attacks” against the population.

Dozens of missiles fired. In all, 74 missiles, mostly cruise missiles, were fired by Russia on Friday. The Ukrainian army, however, claims to have killed 60 of them. Ukrainian President Volodymyr Zelensky thus called on the Western camp to “increase the pressure” on Moscow, but also to deliver more defense systems.

Vladimir Putin is refining his strategy. The Russian autocrat has spoken with those responsible for the Russian military operation in Ukraine, the Kremlin announced on Saturday. “I would like to hear your proposals on our actions in the short and medium term,” he declared during a meeting, excerpts from which were broadcast by Russian public television.

Today News Post - December 4, 2022 0
In India, a big step for parity has been taken. Schoolgirls now have the right to wear the same outfit as schoolboys in a...

Diego Maradona: visit to the small museum dedicated to the cult of the Argentine footballer in a popular district of Naples

Two demonstrators hanged in Iran, a 6-year-old boy opens fire in his school in the United States… around the world of info