Two days before the second round of the presidential election in Brazil, one observation: lies and fake news have literally flooded the debates of the campaign, in particular under the impetus of the Bolsonaro camp. 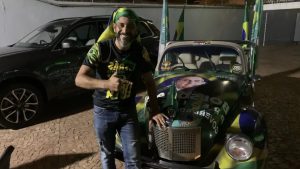 Pedro travels the city of Piracicaba to meet the population, who voted 70% for Jair Bolsonaro, his candidate, in the first round of the presidential election. (GILLES GALLINARO / RADIO FRANCE)

The campaign for the second round of the Brazilian presidential election is coming to an end: on Sunday November 30, voters will have to choose between Jaïr Bolsonaro and Luiz Inacio Lula da Silva, at the end of an extremely tense last straight line, where the political debate has been totally overwhelmed by a daily avalanche of misinformation. For example, Jaïr Bolsonaro has been questioning electronic voting for months, citing possible fraud, even though this system is reputed to be one of the safest in the world.

It is by going to see Jair Bolsonaro activists that we understand a little better where this doubt comes from. For example, Pedro de Magalhaes is a former legionnaire in the French army. Now the boss of a security company and a shooting club, he travels the city of Piracicaba at the wheel of his Beetle to “feel the energy” of the population who voted 70% for Bolsonaro in the first round. of the presidential election.

At home, he insists on showing this video of a computer scientist friend who claims that he succeeded in creating software capable of penetrating the electronic ballot box system. “Here we are going to add a few more Bolsonaro votes, he describes, joining the gesture to the word. We will see if everything is ok… Perfect! All the Bolsonaros appear here… But what is recorded in the ballot box? “Lula votes! Eight votes slipped into the list…”

On several occasions, Pedro wanted to post this video on social networks but, each time, he claims, it was blocked. When we talk to him about fake news, Pedro prefers to mention those which, according to him, circulated against his candidate, Jaïr Bolsonaro, during the period of Covid-19. “We have information that proves that Brazil was the first country in the world in the fight against the Covid, he assures. The rumors that you have, outside, without any source, say that Brazil was abandoned… If you went to get the information at the source, you would see that the WHO is a left-wing organization that does everything to harm our president. They have interests in Brazil!”

“We have to stop the bullshit, Brazil is considered the country that has vaccinated the most and has been on the front line in the fight against Covid. Period!”

Confusion has settled all over the Brazilian countryside: the truth of one camp is considered disinformation in the camp opposite.

The Lula camp rushed into the trap of fake news

Opposite, supporters of candidate Lula rushed into the trap, quite recently, after realizing that the crime of fake news could pay off at the ballot box. Marcela Duarte works for the Lupa News agency, created in 2015 to verify information.

“We observed that a whole group of disinformants had been elected: for us, as fact checkers, this realization was painful…”

Deputies, senators close to Bolsonaro, therefore elected on the basis of false communication. Lula’s left was quick to learn from this: just after the first round, the federal deputy, André Janones, coordinator of Lula’s digital campaign, began to spread fake news, using the same tricks, the same disinformation mechanisms used by the right.

André Janones’ debut is spectacular: on the basis of a video where Jaïr Bolsonaro sordidly implies that during a visit to a Venezuelan refugee camp, a 14-15 year old girl tried to install between her and him an ambiguous atmosphere, André Janones extrapolates by qualifying Jaïr Bolsonaro as … “pedophile”.

The Superior Electoral Court contested by the Bolsonarists

The only existing body to police this noise of disinformation, the Superior Electoral Court, has never been so much in demand and is multiplying fines and sanctions, especially against the Bolsonaro camp. This is simply explained: its volume of production of fake content clearly exceeds that of the Brazilian left. But here again the Bolsonarist trolls are trying to impose their own narrative, claiming to be censored, persecuted by this democratic institution. “These are identity reflexes, the expression of a fanatical tendency, analyzes Rosanna Pinheiro Machado, specialist in the Brazilian far right at the University of Dublin. Brazil is the most extreme example that exists in the world today. today: he is the locomotive of a fascist logic that is pouring out by escaping all safeguards on social networks. And this is only the beginning.

For five years, the system of production and dissemination of fake content from the Bolsonaro camp has been professionalized. For this election, its budget is estimated at 12 million euros. And with 46 million subscribers on social networks, Jair Bolsonaro reaches three times more Brazilians than his opponent Lula.