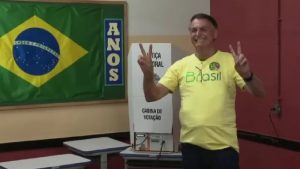 In the middle of the second round of the presidential election, Brazil is divided as never before, Sunday, October 30. Update on the situation with journalist Valéry Lerouge, in duplex from Rio de Janeiro.

Who of Jair Bolsonaro or Lula will win the presidential election in Brazil, Sunday October 30? “The scores promise to be tight. The last poll published [Saturday] gave Lula a slight lead, with a small 52% of the vote, but these same polling institutes were largely wrong a month ago”, reports the journalist Valéry Lerouge, live from Rio de Janeiro (Brazil).

We will therefore have to wait for the closure of the 496,000 polling stations in Brazil, in one hour. “Jair Bolsonaro, in any case, seemed very confident this morning when he voted in Rio with his usual yellow and green jersey of the Seleção, which hid badly a bulletproof vest. Lula, him, voted in the suburbs of São Paulo (Brazil) in a white shirt, the color of peace according to those around him”, continues the journalist. The results should fall around midnight, Paris time.

Today News Post - September 24, 2022 0
Many people don't even know that pickles have many health benefits. Well, most of us think of pregnant women when we think of pickles. But...