Finally, some good news for the environment: the ozone layer should fully recover within the next 40 years. 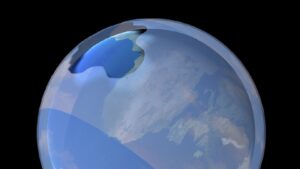 A world map in the arms of a child. (MAXPPP)

230 researchers updated the latest scientific knowledge. And their report published Monday, January 9 indicates that in 2040, the ozone layer should globally return to its pre-1980 state, and that in 2066, the hole located above Antarctica should therefore have disappeared.

It is therefore necessary to emphasize the role of the international policies carried out since the end of the 1980s, which have been effective. Thanks to this gradual recovery of the ozone layer, a previous report has already indicated that 400 million skin cancers should be avoided by the end of the century in the United States alone. Because this ozone barrier protects us: it filters harmful ultraviolet rays from the sun.

Concretely, it is the elimination of refrigerant gases that has paid off. In the 1970s – 1980s, the degradation of this protective layer of the atmosphere was caused by the massive use in refrigerators in air conditioners, or aerosols, of gases that destroy the ozone layer, in particular the famous CFCs, chlorofluorocarbons. The Montreal Protocol, signed in 1987 (and now ratified by 198 countries) has made it possible to reduce and then ban the main harmful gases.

Caution for years to come

Some molecules still persist in the atmosphere, as their lifespan is between 50 and 100 years, but this report confirms that their concentration continues to decline. Hence this gradual disappearance of the hole in the ozone layer over the next 40 years. Provided you remain vigilant, warn these experts, because it is not completely won.

We must remain vigilant because the complete recovery of the ozone layer also depends on limiting our greenhouse gas emissions. And then because geoengineering techniques sometimes considered to fight global warming could do more harm than good.
One of these avenues would be, for example, to intentionally add suspended particles in the stratosphere to reflect some of the sun’s rays back into space, and slightly lower the temperature on Earth.

But experts warn: this kind of technique would harm the ozone, and would contribute to recreating a hole and we could find ourselves in the same situation as 20 or 25 years ago.

Today News Post - December 4, 2022 0
In India, a big step for parity has been taken. Schoolgirls now have the right to wear the same outfit as schoolboys in a...

England-France: “It’s with heart and guts that we held on”, these Blues still have a mentality of champions